What drives people to travel a long way to see the world? To me, it is the curiosity to discovering what life is really like in another place first hand. The secret of getting most out of travel is to experience life as the locals do, seeing the world through unfamiliar eyes. Acclaimed travel writer Rick Steves explains in his new book “travel as a political act”, that Americans who can have the time of their lives and come home smarter with a better understanding of the interconnectedness of today’s world and just how our nation fits in. I hope to echo his idea on the topic of travel more thoughtfully to any destination, building one’s own understanding of diverse places with an open mind. This photo essay will illustrate La Paz (Bolivia), Istanbul (Turkey), and George Town (Malaysia) through my snapshots of those memorable places, where I dived into the nuanced daily urban living scenarios besides the tourism-oriented to-see-list. 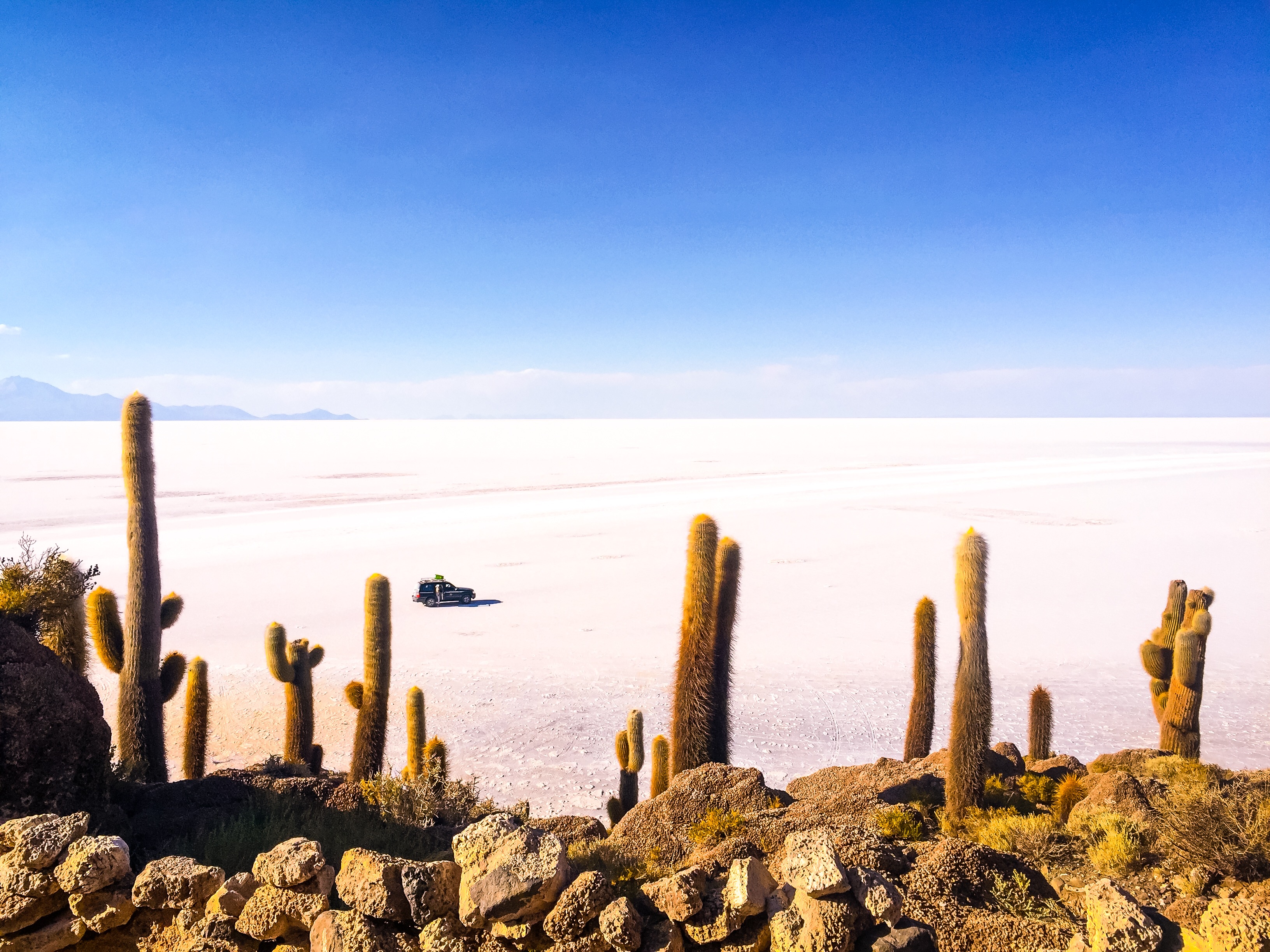 Relaxation, entertainment, and poolside drinking are certainly not the only way to travel. Venturing beyond comfort zones allow you to enter an eye-opening phase beyond typical tourism sightseeing, research tours of famous designer projects, or luxurious “all-inclusive-resort” indulgent. In fact, to gain most out of travel, I prefer to stay in local houses and explore the authentic neighborhood lifestyles. It’s important to meet with locals, in gathering valuable insights that later may inform perspectives of that particular culture and places.  So, be open-minded and allow your own ingrained ideas and preconceptions to be challenged. The fun experience all began from making a conscious choice of an itinerary that stays a bit detached from those “highly curated spots for out of town tourists”. Of course, we can’t skip the most visited cultural and natural attractions, just need to be more original in creating one’s own deeper dive itinerary, including lodging, what to see and even whom to talk to. Keep the schedule flexible to accommodate changes.  And by shopping and dining at local places, you will also save considerably for the travel budget! 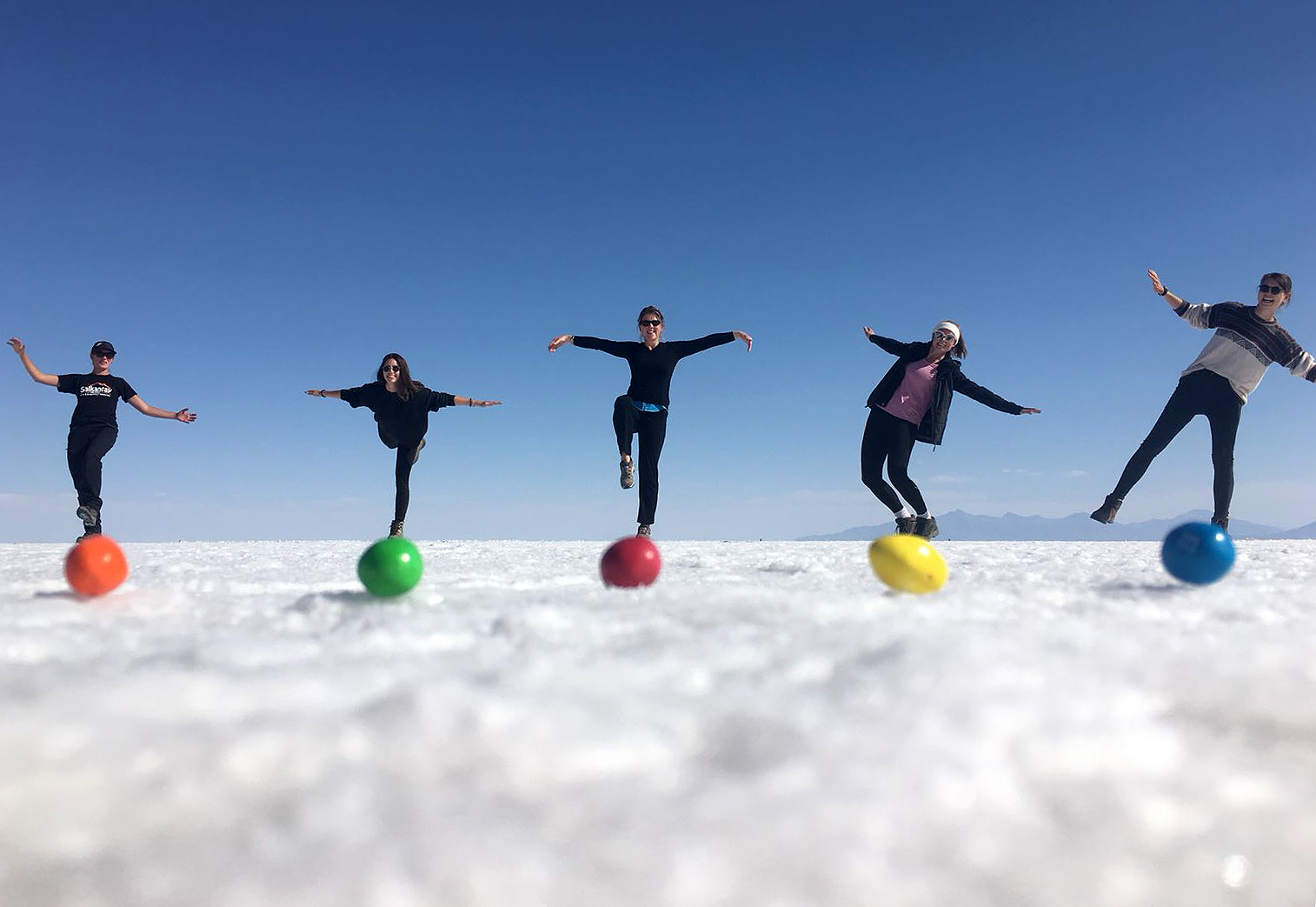 Rugged, rougher on the edges, superlative in its natural beauty, Bolivia is one of the most unforgettable countries I visited. La Paz, the world’s highest capital city in Bolivia, offers a rich experience of indigenous culture. Compared with the highly developed tourism industry of its neighbor Peru, Bolivia has intended to preserve the culture, lifestyle and natural landscape more, keeping lots of its territory uncharted, mysterious and very intriguing for outside explorers.  During my South America trip, I first arrived by air at the sea level city Lima, then continued moving south with road trips, train rides, and ferries deeply into the Inca world – Custo, Machu Picchu and the amazing lake of Titicaca. Arriving La Paz was at the end of a long, tiring trans-border adventurous bus ride through many small local towns.

There are few cities with such an extraordinary setting as lofty La Paz. At 3,640 metres (11,942 ft) above sea level. When arrived at La Paz by bus from the hilltop, everyone on the bus was impressed by the starry city lights in the valley. The dramatic elevation change of upper and lower parts of the city is about 1000 meters (3000 ft)!  La Paz is a unique city where modern capitalism mixes with age-old indigenous traditions and a city of stark contrasts. From cold and miserable, high altitude suburbs full of haphazard, half-built houses, to the swanky mansions and modern apartment blocks in the warmer environs of the upmarket Zona Sur. it’s the first place I visited where low-income neighborhoods are on the top of hillsides, while high-end neighborhoods are located in the lower elevation of the city terrain in order to stay away from the cold and severe wind at the higher altitude. Our day tour riding the cable car and local bus allowed us to experience real Bolivian life like locals: organic farmers market, witches’ market, colonial zone, and the urban squares and parks. 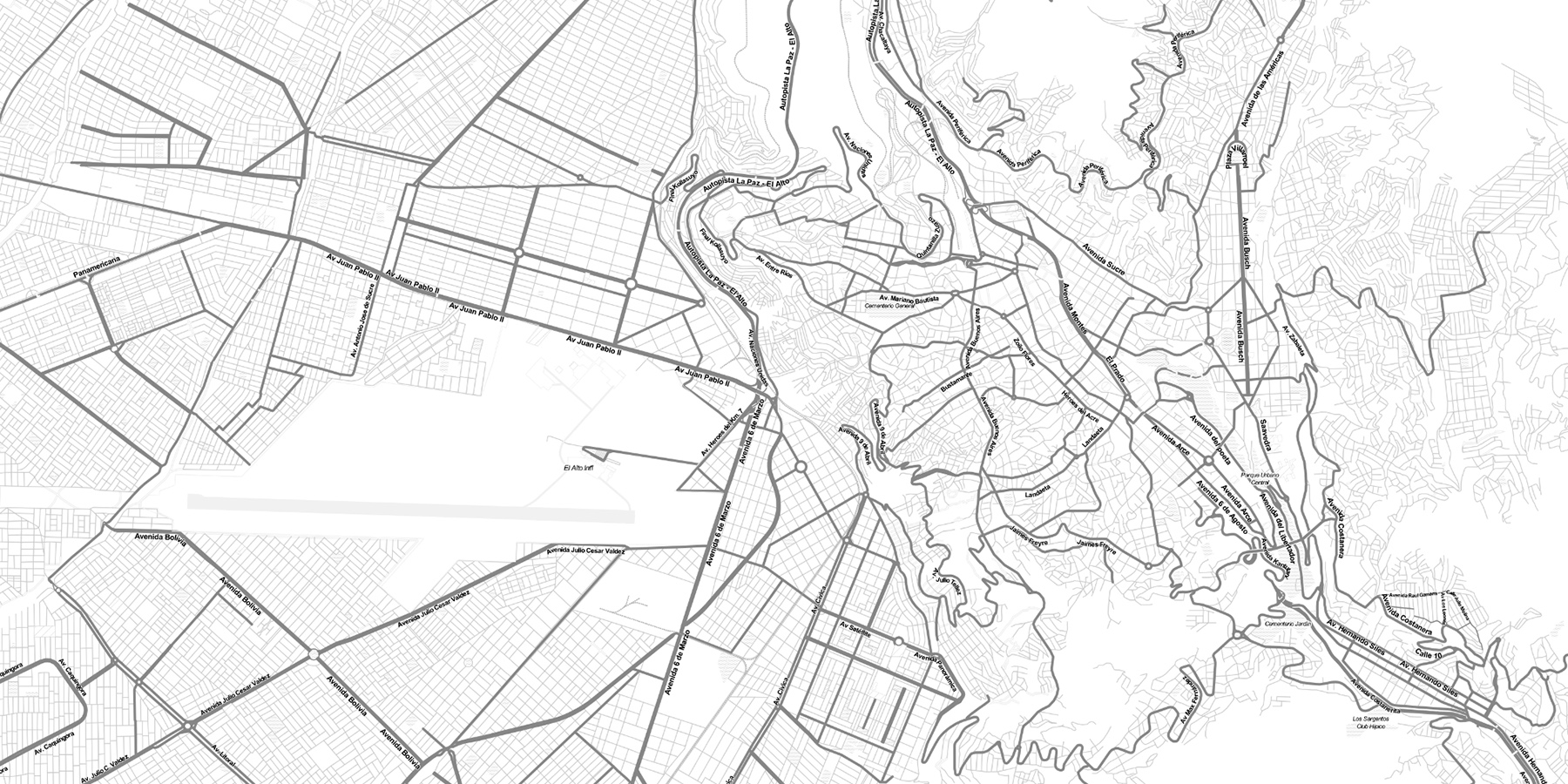 Upon arrival to the upper part of the city terrain by cable car, we started a walking tour in a large scale organic farmers market by the locals. The best time to visit this market is on the weekends when more goods are brought in from the countryside. The local tour guide showed us an astonishing selection of fresh farm produce that is exclusively organically grown and being sold at the market for fairly reasonable prices.  I learned that there are over 200 varieties of potatoes found in the market! By shopping at the farm market, a local and save money while enjoying organic foods as long as the salary is above average. According to Numbeo, the average salary perceived by La Paz inhabitants is 415 USD. The cost of living in this demographically heterogeneous city is proportional to its average salary. Although Bolivia is considered one of the poorest country in South America, living a reasonably comfortable life is rather easy. 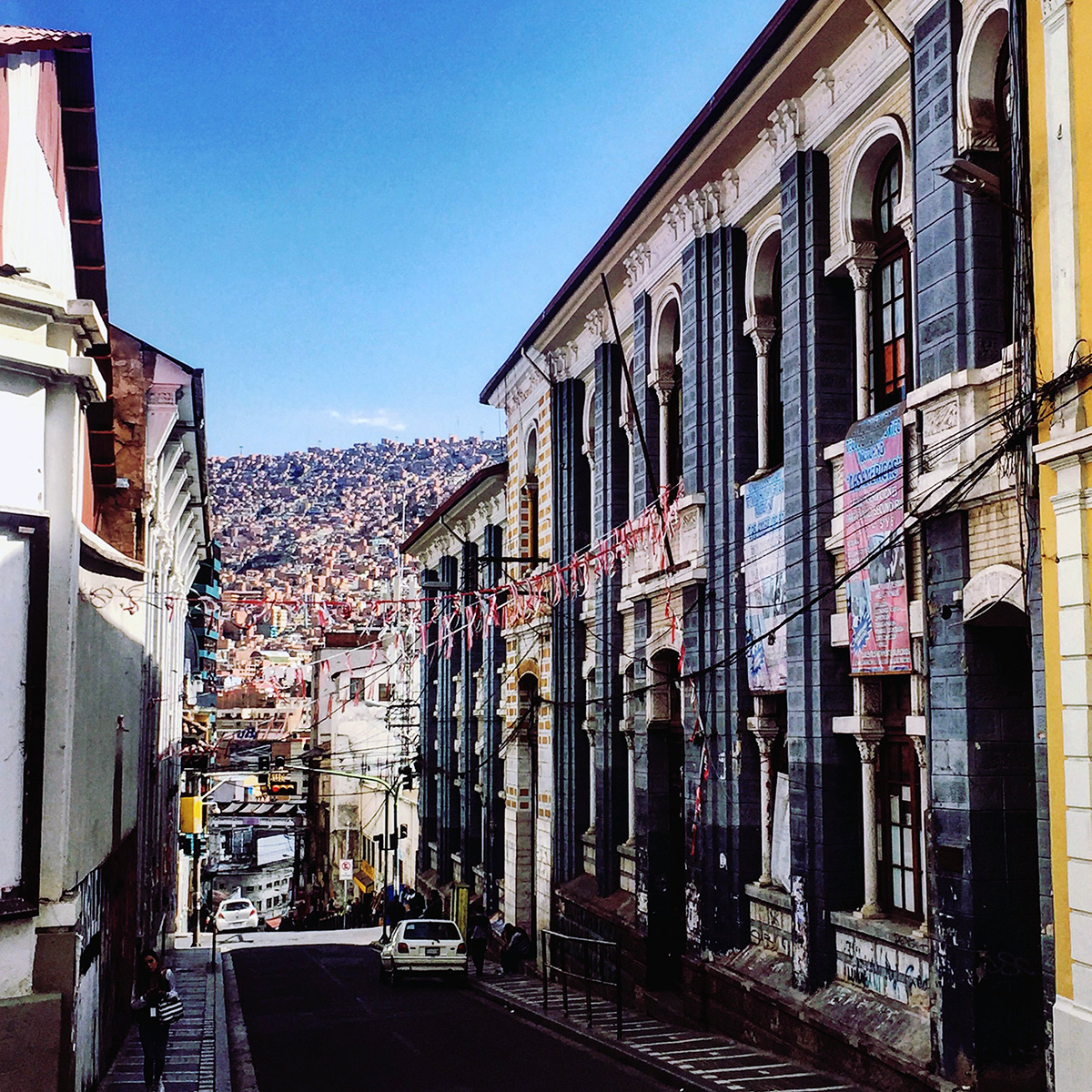 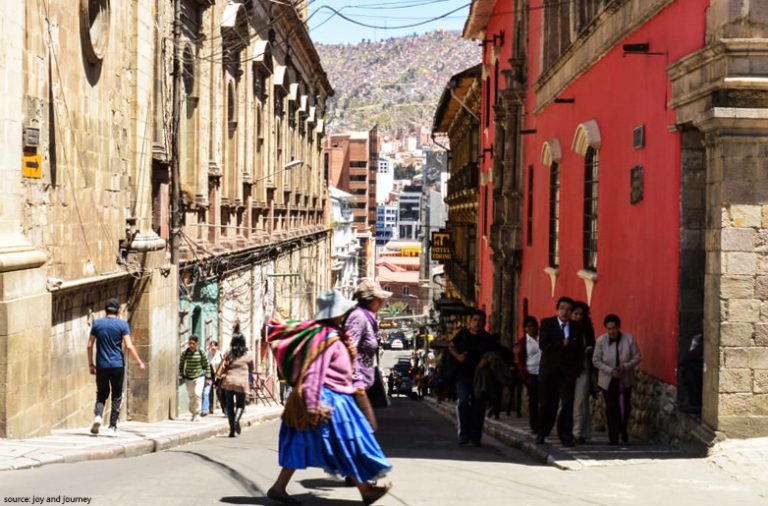 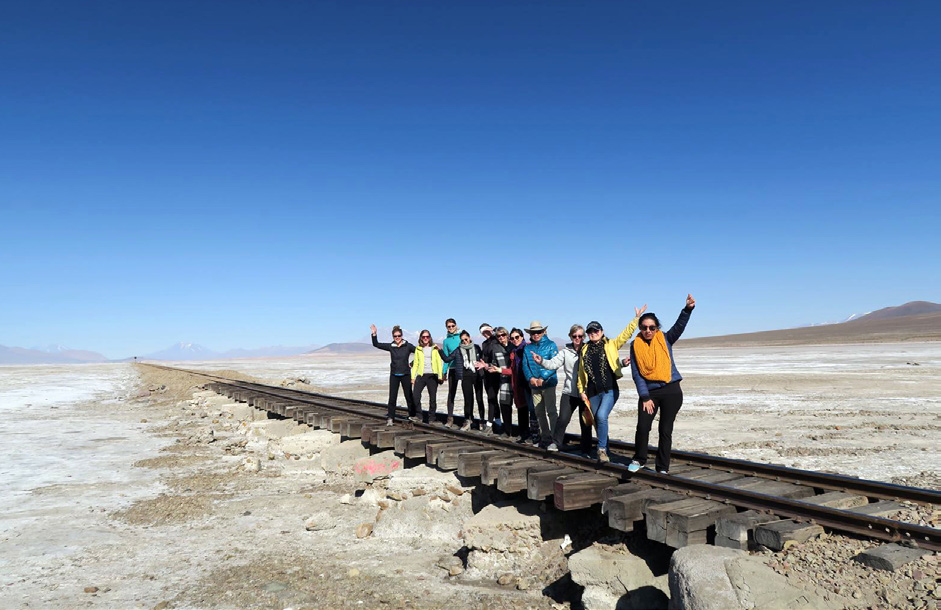 Istanbul is a city with layers of history and time, deposited in its amazing archeology sites dating back to Roman, Byzantine, Latin and Ottoman Empires. I found a small local hotel within walking distance to the famous mosques, museums, and the Grand Bazaar. Then bought transit pass to take the Modern Tram (T1) to see the outer area of the city and the Bosporus. Like many visitors, I was fascinated by how convenient and safe to use public transportation in Istanbul to reach most of the places of interest. With moderate hiking in between stations, it’s a perfect way to explore the real city. 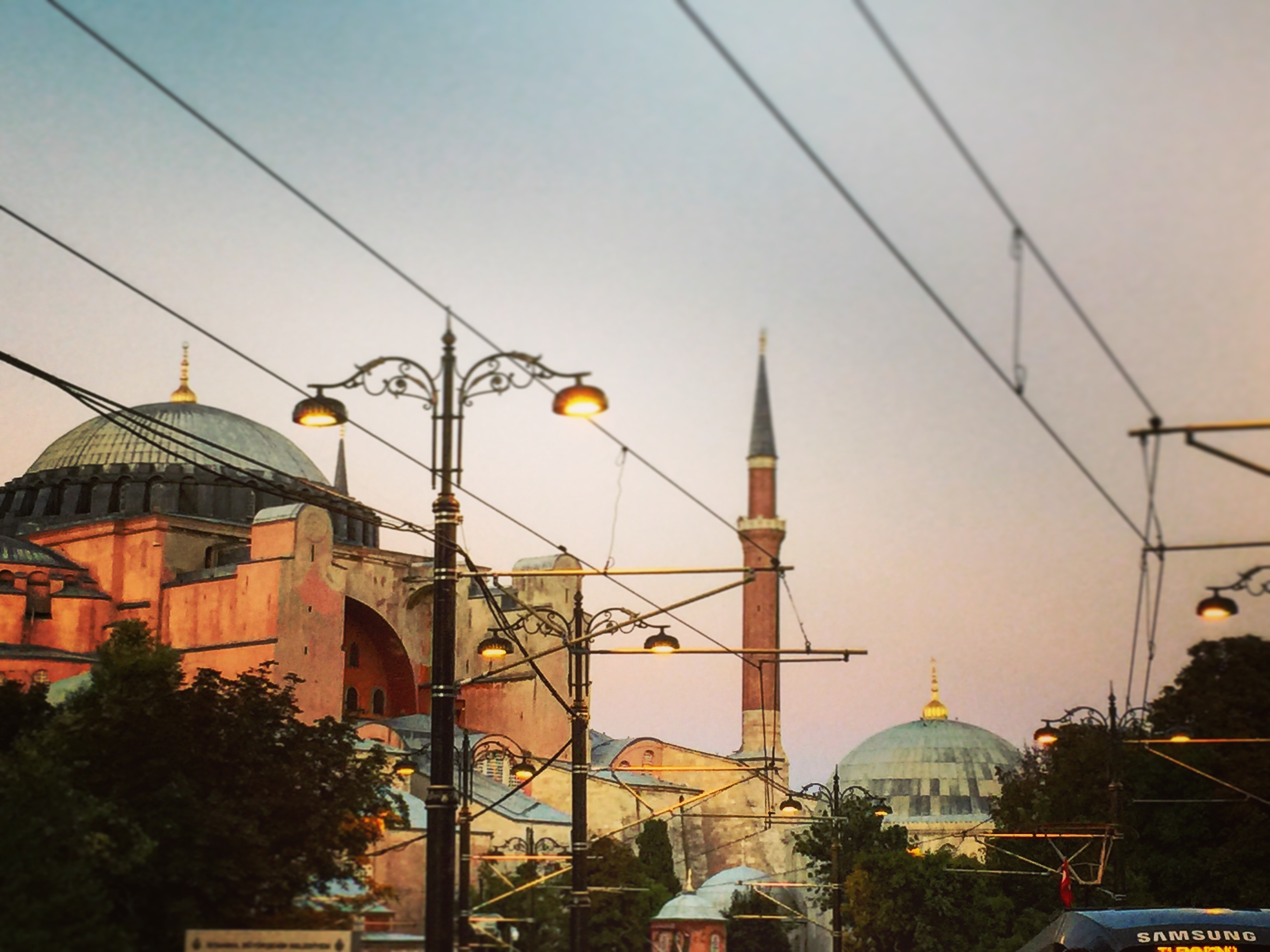 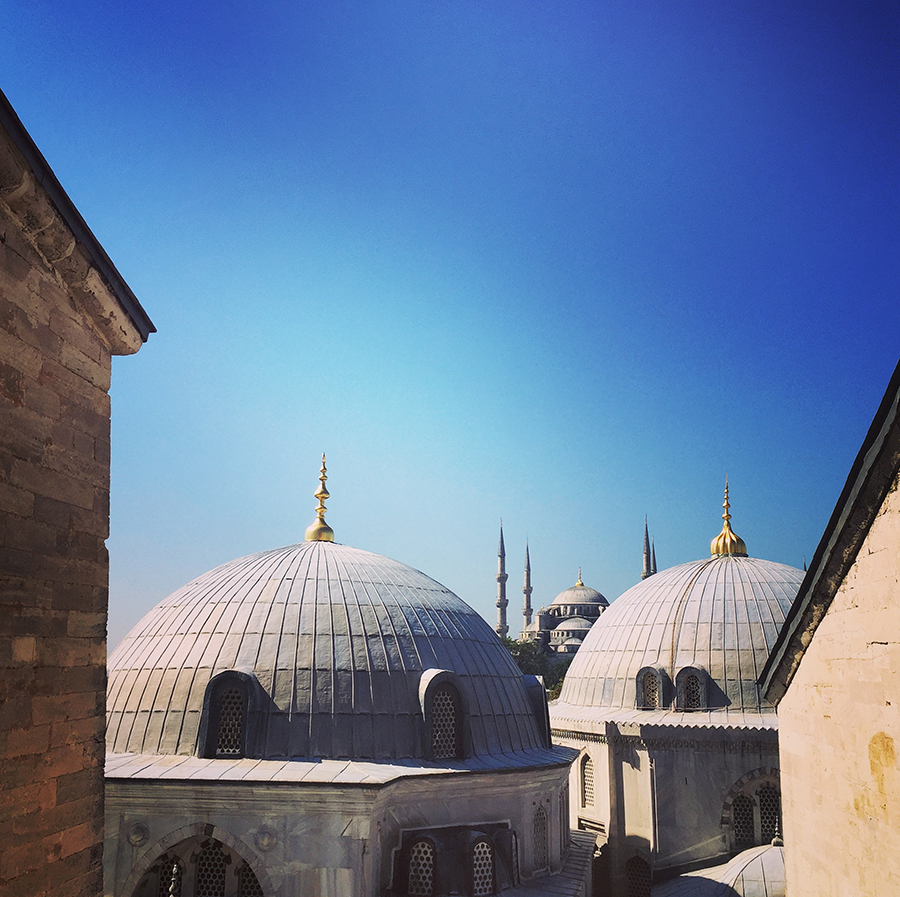 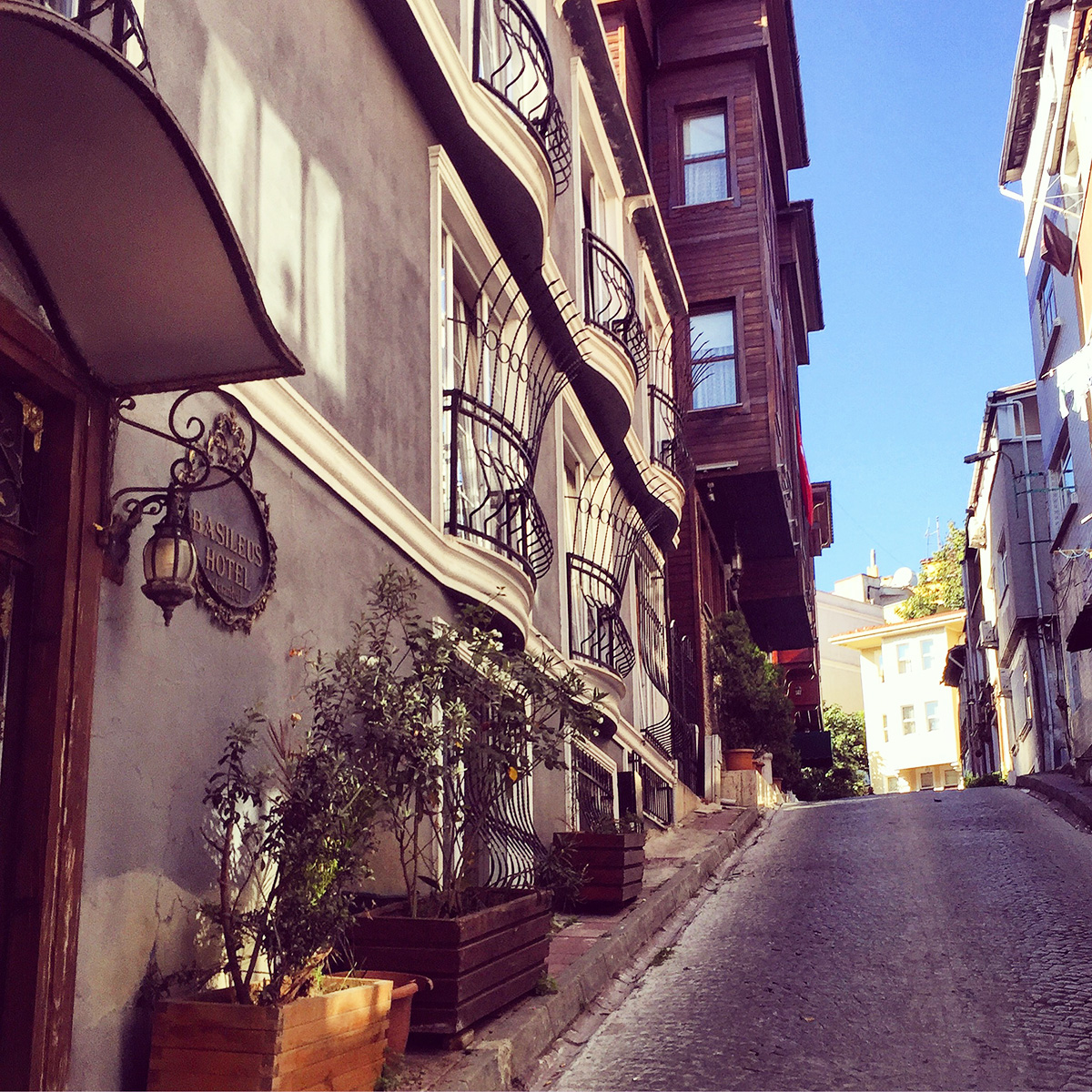 Basileus Hotel is situated in a narrow alleyway in a lively neighborhood of houses, shops, and restaurants. Within one block of the hotel, there is a relatively less visited but unique architectural landmark to see – Little Hagia Sophia. Located at the end of a quiet street, this building was a former Greek Orthodox Church during the Byzantine period, converted into a mosque in 1513. While exploring the mosque and surrounding gardens, surprisingly I found myself the only visitor. 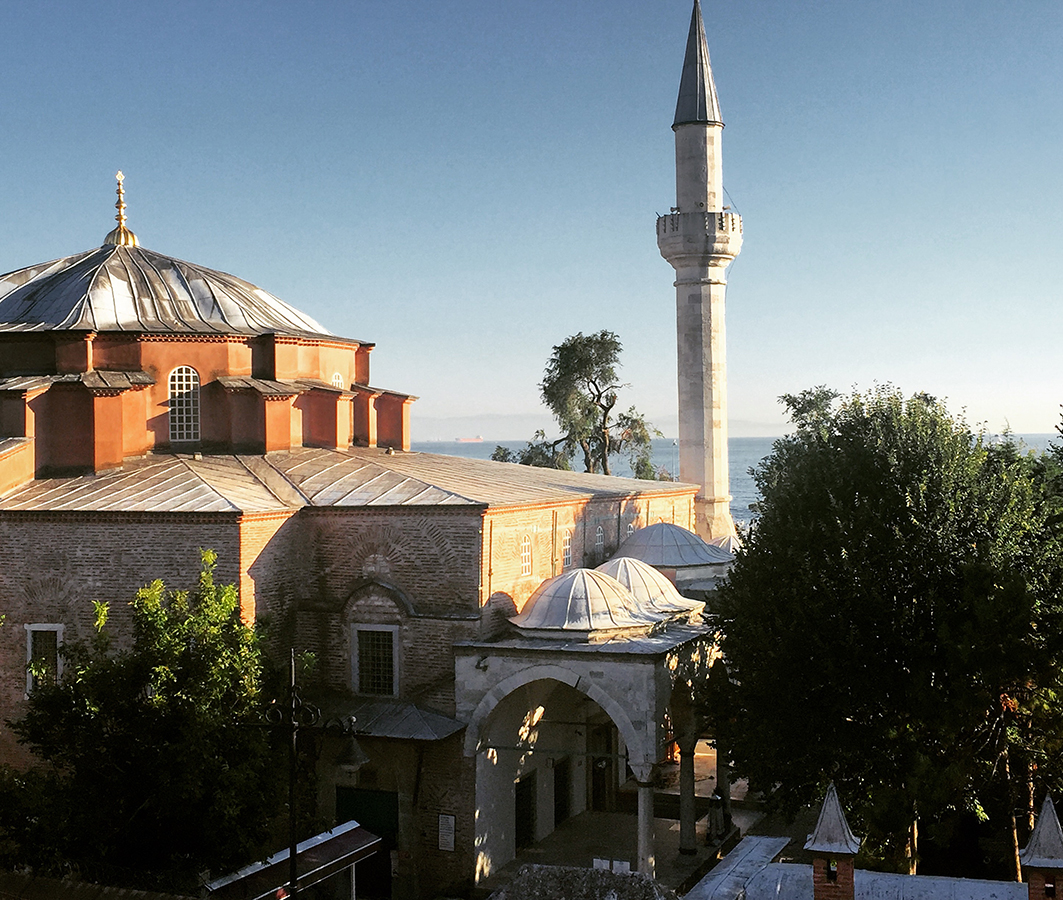 Another relatively less visited but intriguing place is the Istanbul Mosaic Museum. Located near Sultan Ahmet Square, it contains the amazing remains of mosaics excavated from the courtyard of the Great Palace of Constantinople. The museum floor was originally part of a peristyle courtyard in the Great Palace and is one of the very few elements of this Byzantine palace to have survived. The Great Palace mosaics that make up the museum have been dated between 450 and 550 AD and depict scenes from daily life, hunting nature and mythology rather than religious figures. Particularly impressed by the beauty and technique of mosaic pattern making, I ended up spending more time here than any famous mosques, palaces and architectural wonders in Istanbul. 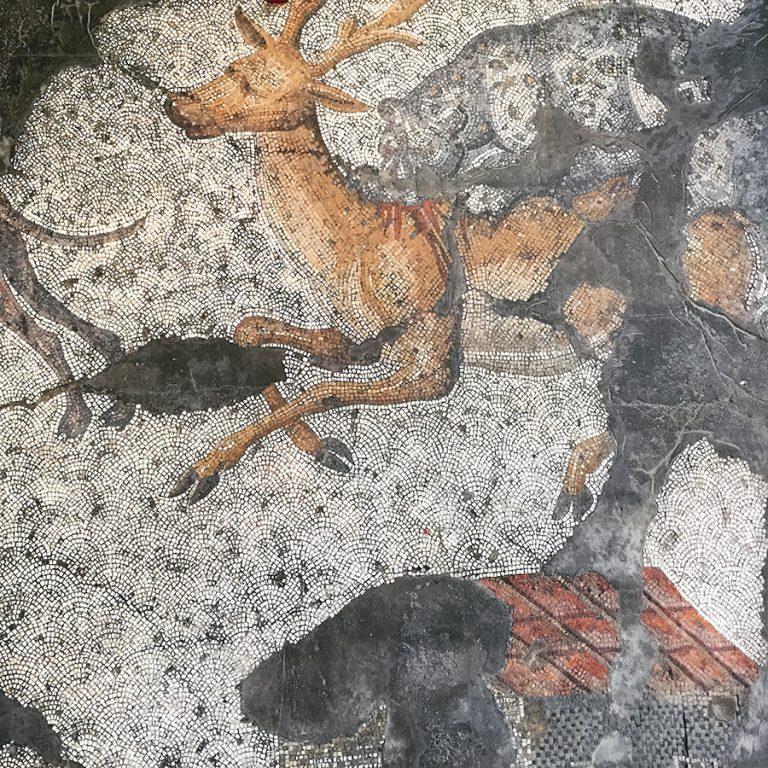 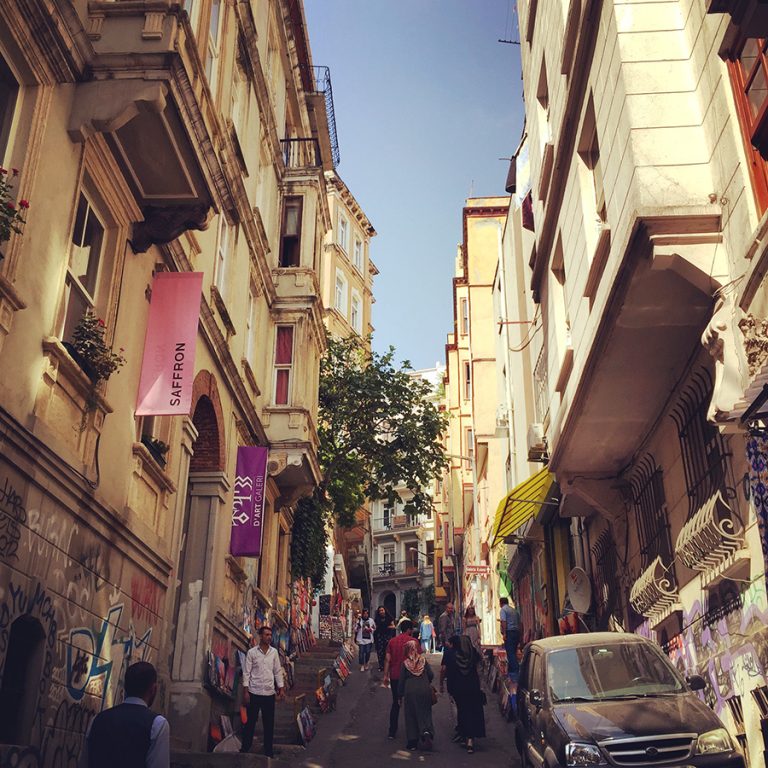 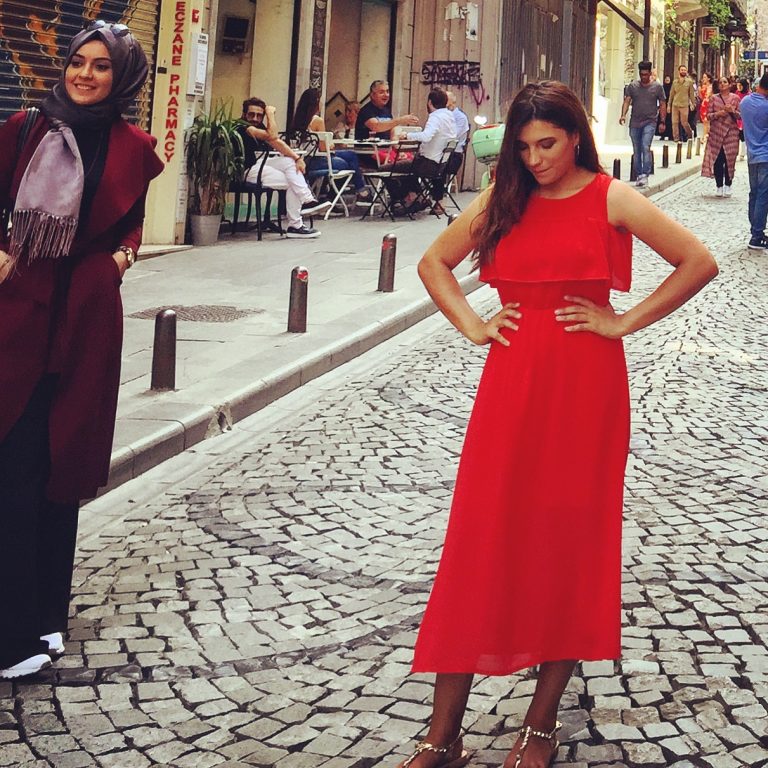 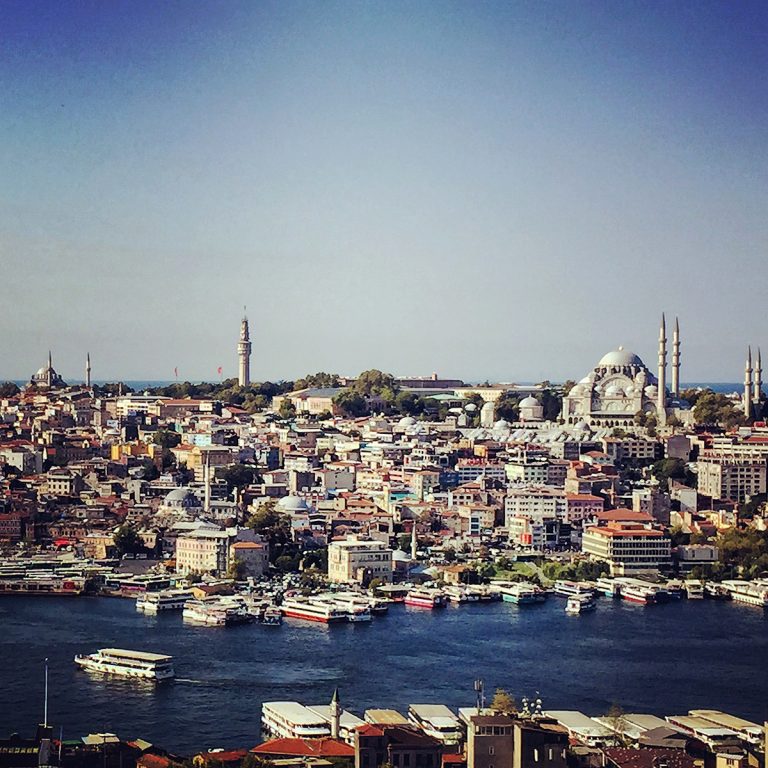 As a historic city of the Straits of Malacca, George Town is one of those rare frozen-in-time cities which mingles with today’s modern lifestyle. Located at a strategic position for the 15th – 18th-century trade between Europe and Asia, its culture and townscapes further evolved after being colonized by the British. Together with Singapore and Malacca, George Town formed part of the Straits Settlements, which became a British crown colony in 1867. It has long served as the link between Asia’s great kingdoms and an important outlet to the markets of Europe and the Middle East. 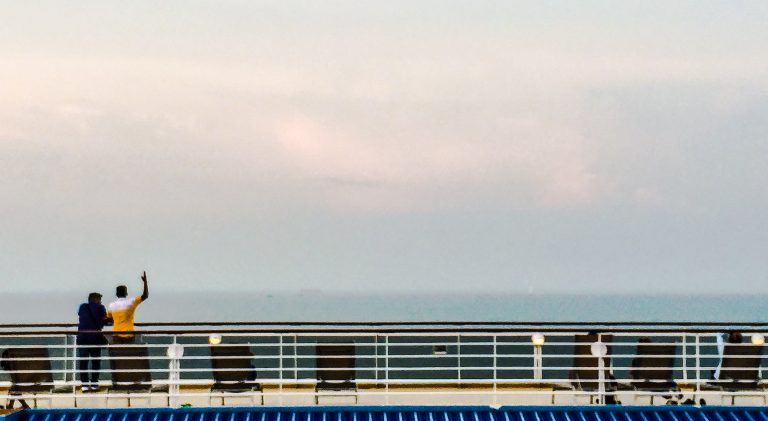 George Town delivers old-world Asia in spades, from trishaws pedaling past watermarked Chinese shophouses to blue joss smoke perfuming the air. The city acquired a large eclectic assortment of colonial and Asian architectural styles. It also gained a reputation as Malaysia’s gastronomic capital for its distinct and ubiquitous street food. The historical core of George Town has been inscribed as a UNESCO World Heritage Site since 2008. It’s been catering for the history buff and travel photographer but also the shopaholic and foodie fanatic. 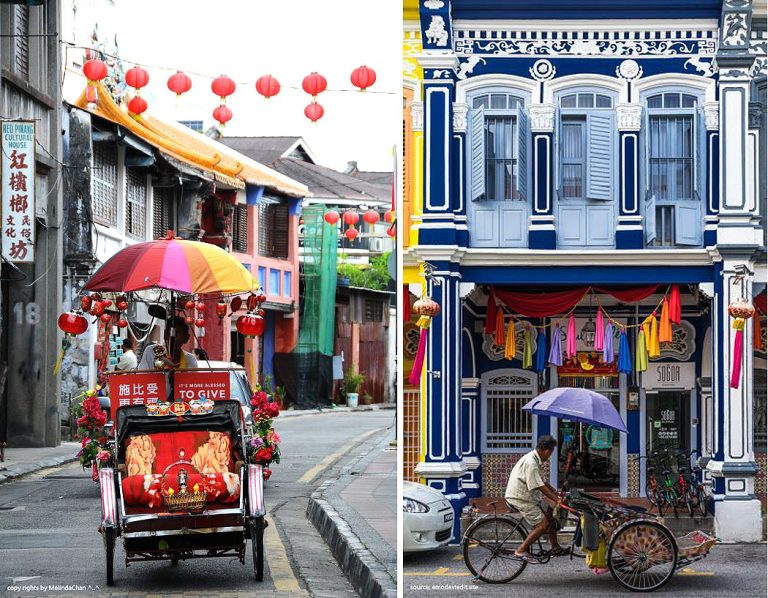 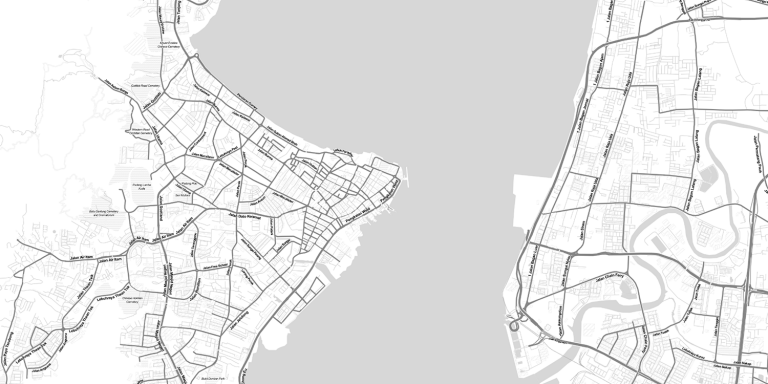 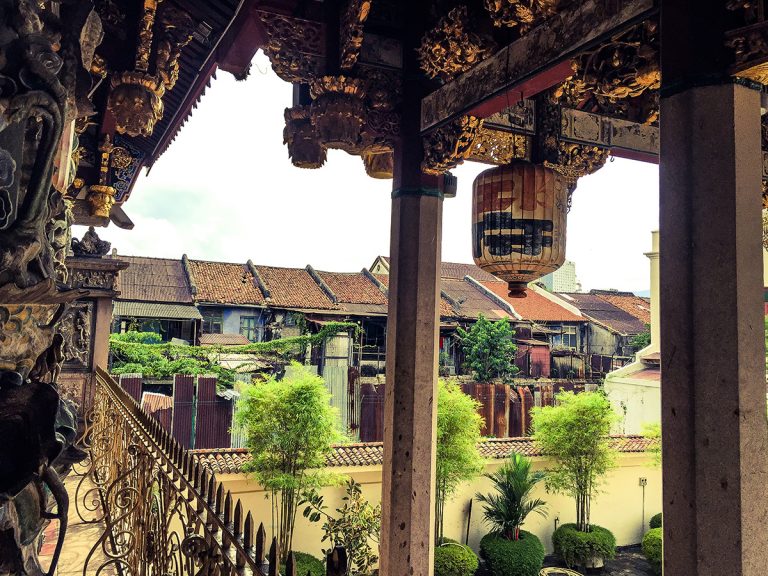 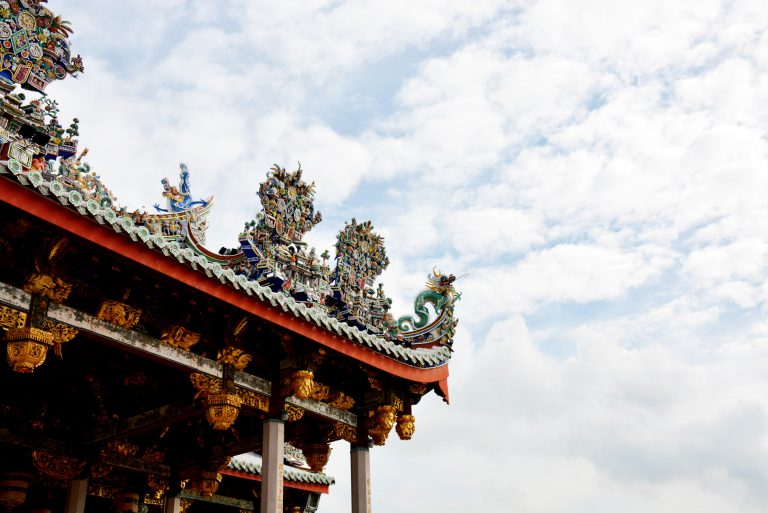 In George Town, the transportation means for tourists to explore the streets is by “cycle rickshaw” (flower bicycle) rides. This primitive way has been so popular among travelers, for them to capture an authentic character of this historical city. 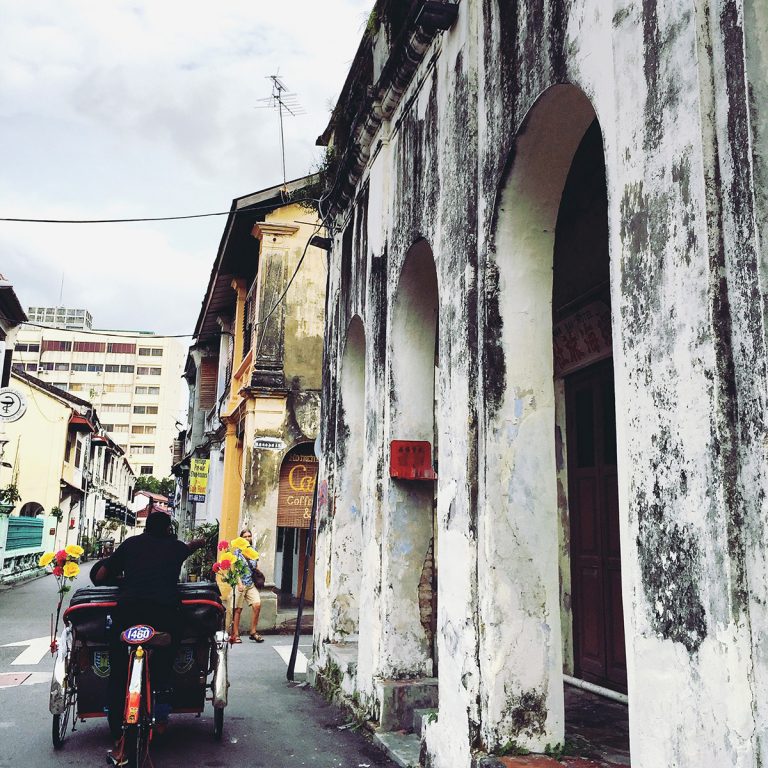 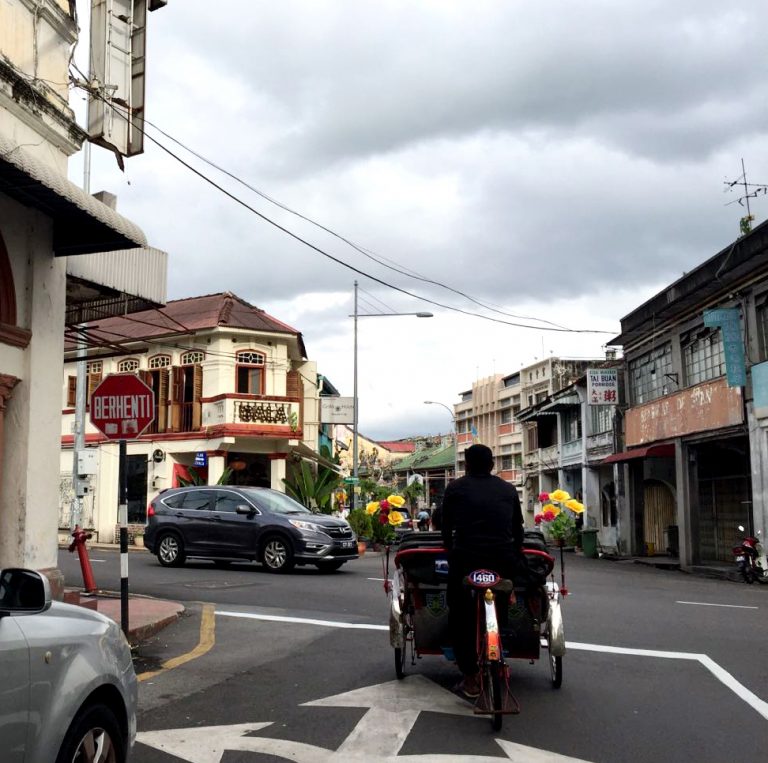 Since wearing its UNESCO crown, an amazing street art scene has exploded in George Town. It started with a government-commissioned exhibition back in 2008 called “Sculpture at Work”.  These 52 ironwork showpieces can be seen all over the old town and tell the story of George Town’s history and people. Since then, more artists have been invited to create pieces upon the crumbling walls of heritage buildings. Making strolling through Georgetown’s streets just a little bit more exciting, in 2012 Penang’s municipal council hired London-trained Lithuanian artist, Ernest Zacharevic and charged him with breathing new life into some of the atmospheric Chinese shop-houses around the inner city. An effort to spawn awareness of the rich history of the streets, the project was a success with Zacharevic turning certain areas into thriving tourist destinations that also became the much-talked-about object of attention among locals. Below are some of my favorite pieces created by this artist with interesting 3D quality. 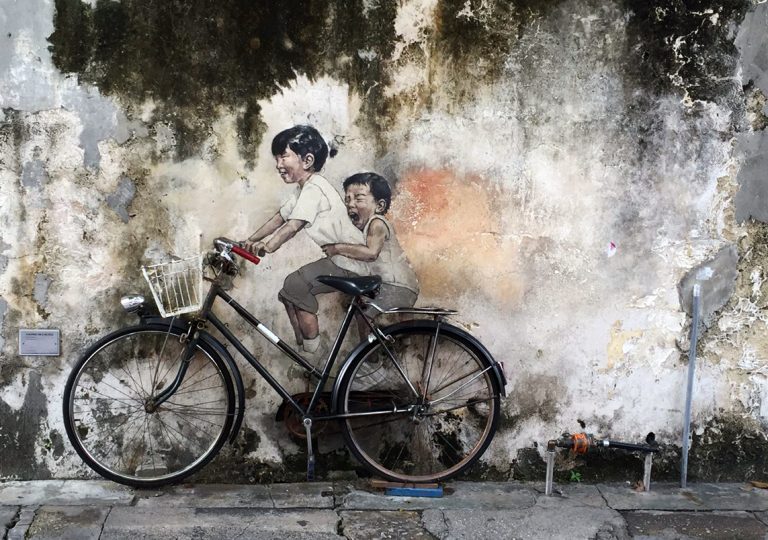 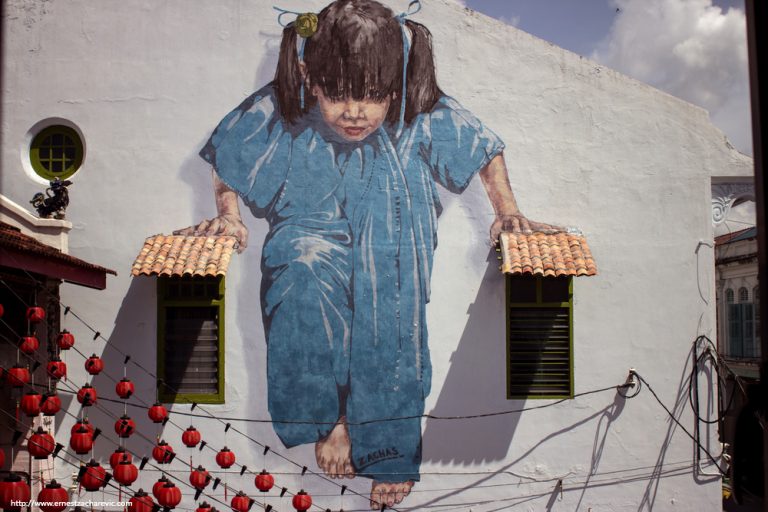 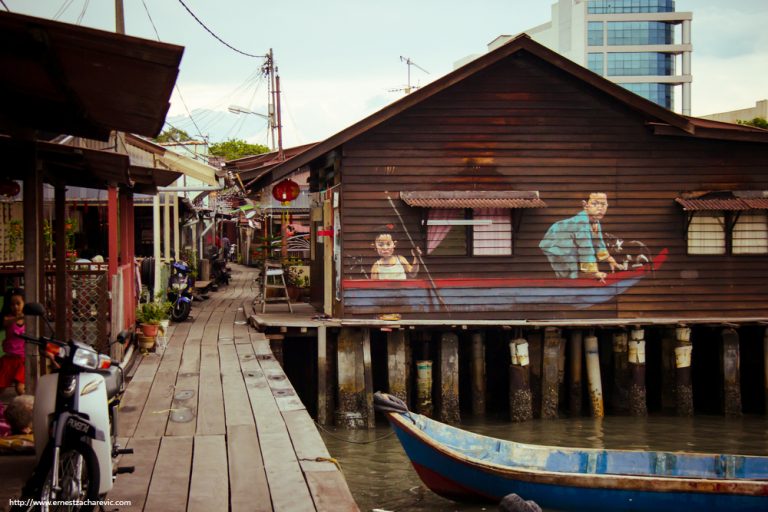 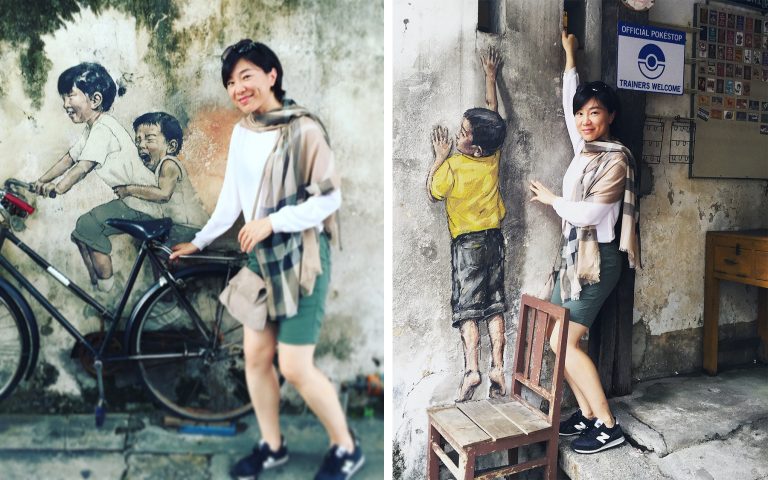 The metal wire artwork in Penang is also very captivating. Some of them come with a descriptive sentence or even a couple talk bubbles as if the artwork was a one frame comic in the newspaper. Since many of the metal rod caricatures were installed at specific locations, it’s interesting to read the text because they tell you a story about that particular place. 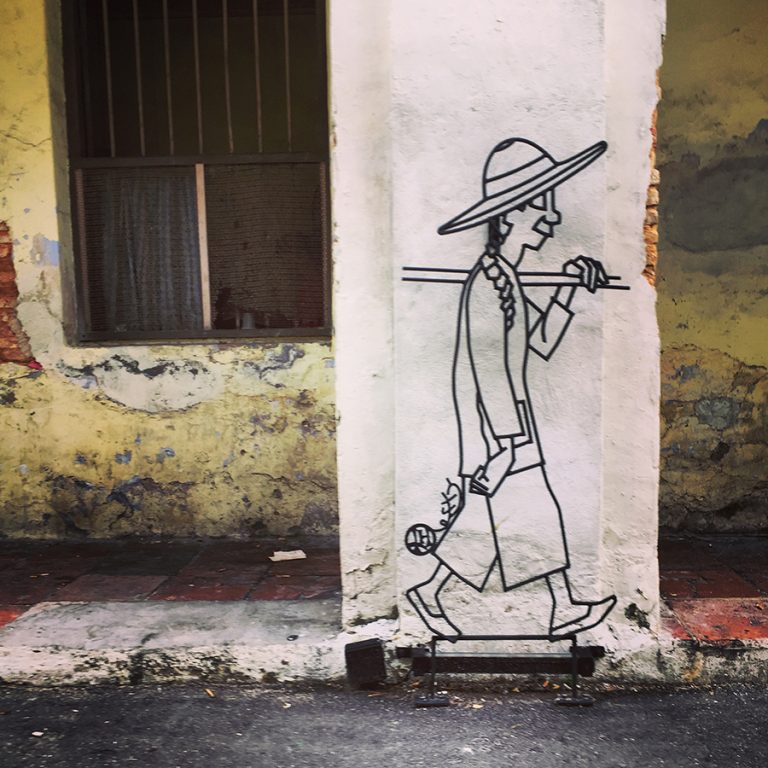 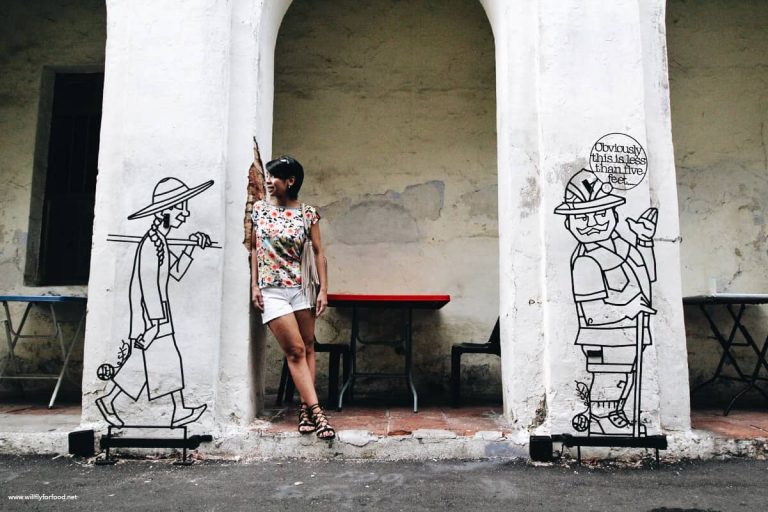 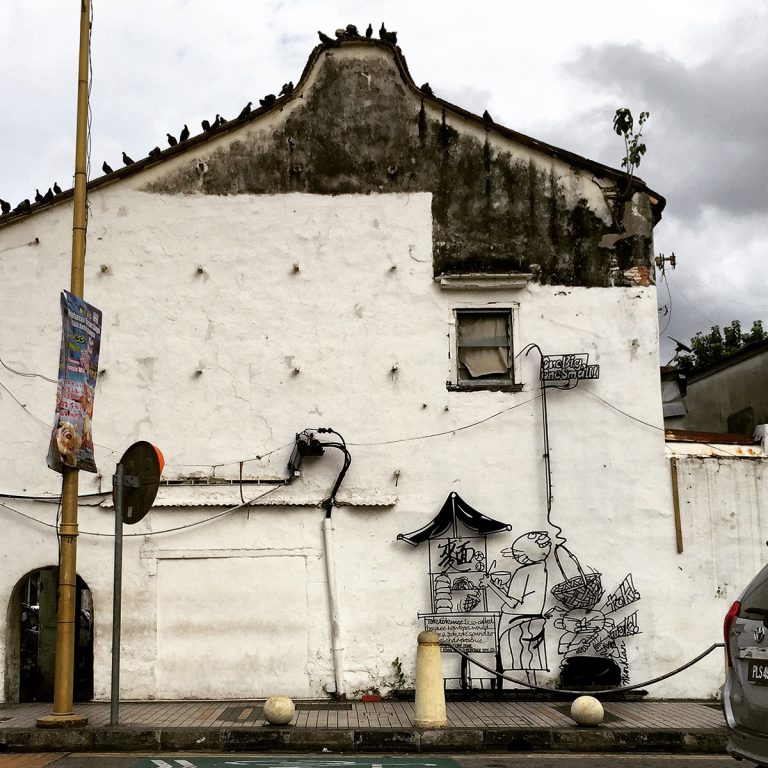 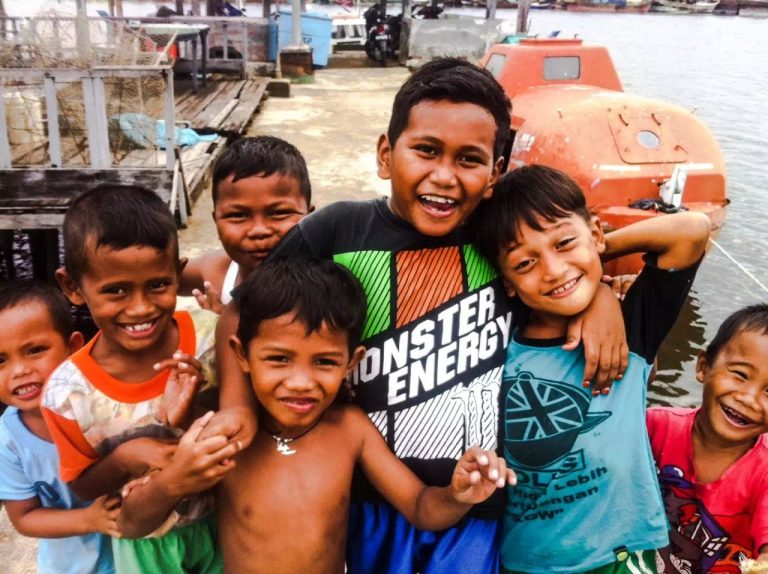 With walkable, atmospheric streets lined with heritage architecture,  local gastronomical delights, coffee shops, distinct indigenous and colonial architecture, and the right balance of travelers and locals, George Town in Malaysia has gained so much popularity among world travelers who look for adventure and relaxation.

All photographs by Peiwen Yu unless noted otherwise.