By sharing the following two stories in the beginning of the New Year, I hope to explore environment and culture-friendly models of urbanization, towards more sustainable, memorable and vital communities, with the renewed power of design.

Around the Christmas and New Year holiday seasons, I was visiting and living in the heart of metropolitan Beijing. While experiencing the dramatic weather switch from heavy, toxic smog days to blue sky days in just a week, I got to reflect upon what we, the city building professionals might have done to the land and cities, in the global picture of ever increasing consumerism and desire for urbanization. The amount of new construction materials we consumed in creating new infrastructure and built forms each year add to the result of changed environment. 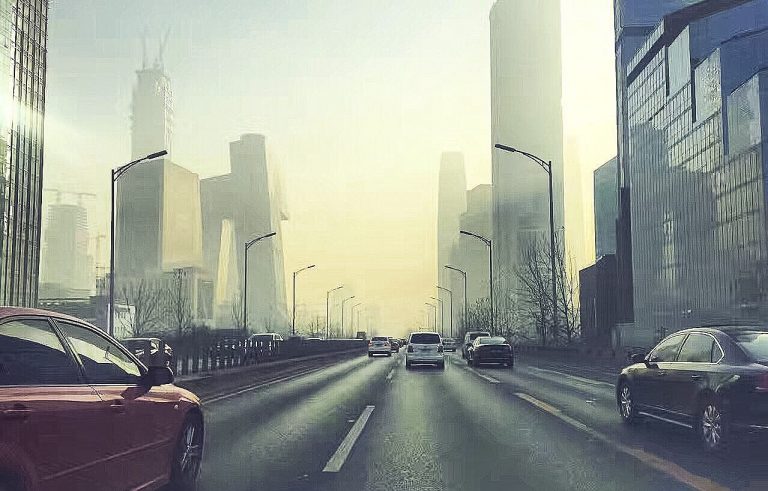 Do we believe that everything is connected with everything else in today’s world? In the global era of instant having what one wants in life, instant creating cities for living, instant wanting to become rich, are we driving our desire too fast and too far, without making any connection to what we are consuming, and what has changed around us?  When painting a beautiful perspective for a new city, new park, or designing a new stone-paved plaza, did we ever think about mitigating the linked environmental issues caused by mining more mountains, polluting more rivers, destroying the air quality and some of the most previous landscape heritage?

New Year of 2017, a series of 20 shocking photographs revealing Chinese land condition after construction material mining and urbanization was presented at YiXi – a very influential China Thought Leader and Platform ( as known as the TED in China). The free lance photographer and award winning film maker  Wang Jiuliang presented his two-year long project, named: “The Unfinished City on One Side, while the Broken Mountains and Rivers on Another Side”. By capturing the changed landscapes that we don’t witness in daily basis while consuming those resources, he emotionally pointed that that some of our basic living needs is endangered by the society’s desire of pursuing “prosperity”. And we must adopt new models of economic growth and urbanization without compromising the environment, starting from asking how much resources we really need to consume for our life’s happiness?

Following images through his lenses demonstrate the Chinese land after transformation. 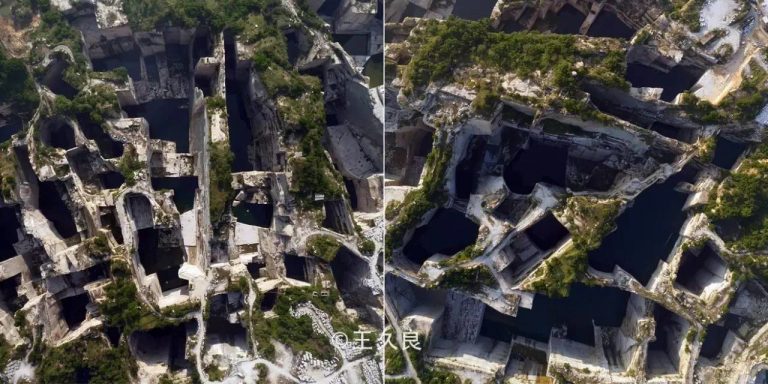 100-200 m deep mine pits were carved into mountains and left a scary honeycomb-like scene.

This particular Riverfront City with rows and rows and residential towers and villas was built in just 12 months on an originally scenic site with only a few villages. 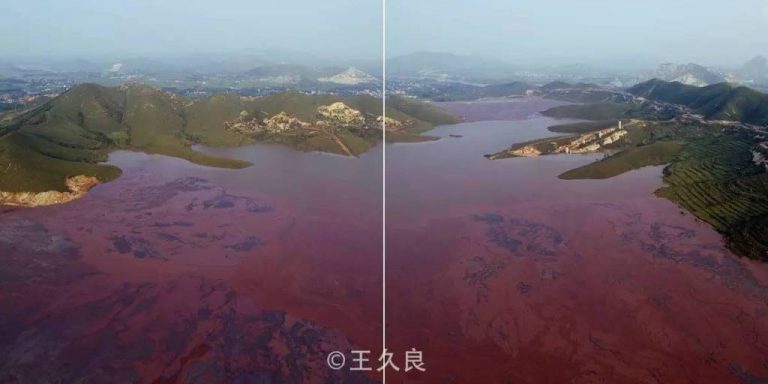 Water system heavily polluted by the mine washing activities. 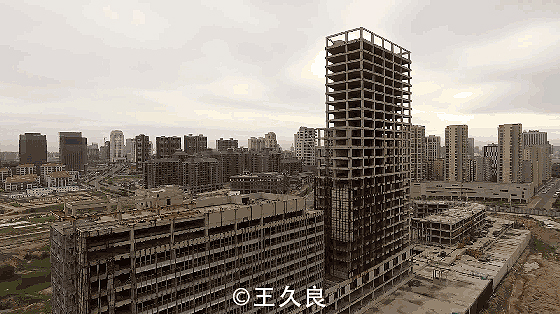 Well-known Chinese Ghost Town – Ordos where piles and piles of construction materials are consumed to create a city that is unfinished, and never showed real community and vitality ( RenChi).

At the end of this story, we have to appreciate the photographs of Mr. Wang for it reminded us to always look for a changed model of urbanizing and constructing the new communities. In the past decades of development, housing bubbles and ghost towns were created consuming precious natural resources, just to fulfill human desire for economic wealth. Unfortunately, it did not necessarily always lead to vitality and real community with RenChi.

Wang’s presentation at YiXi can be viewed on YouTube:

The second story tells how a social welfare, low budget project improved people’s life through modest but effective upgrading of a village building. This January, the Beijing Architect He Wei who led the this project was mentioned by Archdaily as one of the 10 Young Chinese Architecture Firms To Watch Out For,  “he’s contemplating and seeking to create a dialogue between the past and the potential future of China’s leftover buildings”.

To me, preserving the environment and culture, reusing what’s already there in the new design, and enhancing life quality with modest budget is the core value and beauty of design. It sets a model not only for rural construction, but also for urban development within existing urban fabric. For the next phase of new urbanization, such thinking may create more memorable urban spaces by inheriting the tradition and lifestyle people cherish, and help to achieve real vitality (RenChi) without over consuming the environment our future generation will live in.

The site is situated in Xihe Village, an unincorporated village in the mountain area that is 30km from the county town of Xin County, a National Poverty County under the administration of Xinyang City, Henan Province; it is within theDabie Mountain Revolutionary Area. On one hand, the village is rich in natural and cultural landscapes: mountains, ancient dwellings from Qin Dynasty, ancestral temples,old trees, rivers, paddy fields, and bamboo forests…etc. On the other hand, the village suffers from poor accessibility, poor economy, lack of vitality, and a growing tendency of more empty-nesters. Most of the people still living here are left-behind elders, children, and handicapped villagers.

The project site is in the south part of the village, occupying more than 30mu of land. It used to be the place of the Xihe cereals and oil trading centre, a  granary in the 50s. Within the site area, there are five existing buildings that all have double pitched roof s and masonry structures: 2 granaries with big volumes and closed spaces and 3 auxiliary buildings. The buildings are in fine conditions, but are no longer in use.

This is a public welfare design project; the aim is to improve the existing condition of the village through good design. By reconstructing the space and functions of the currently half-abandoned building, the architect not only provides the villagers with a public activity centre, but also implants a new cultural project (a miniature museum that reflects the local agricultural history) and a restaurant to help improve village economy and the villagers’ quality of life.

The project also explored the possibility of low-cost construction in rural area: the project occupies an area of more than 30 mu, with the total building area of 1500m2, among which the museum occupies 420m2, the villagers’ activity centre occupies 680m2, and the restaurant occupies 170m2. The total cost of construction (including part of the equipment and furniture) is around 1.5 million RMB.

Using the existing physical condition of the buildings, the design reorganizes the functions, which not only provides the villagers with a public activity centre, but also at the same time increases cultural and touristic service functions, which include a miniature museum and a speciality restaurant.

The miniature museum is aimed at increasing the village’s publicity and stimulating the village’s economy. By collecting, restoring, and exhibiting local agriculture historical relics (such as oil tanks and other agricultural implements used for the manual manufacture of oil), and through creating a participatory exhibition space, the project provides a cultural fulcrum for the village’s new economy (such as tea oil, and chestnut processing…etc.).

The specialty restaurant and villagers’ activity centre provide possibility for tourist reception and local management (such as meeting and wedding celebration), which would stimulate the village’s economy (after the building was put into use, it has already hosted several activities).

Keeping the original spatial characteristics, the design implements moderate modifications: in the activity centre part, the design utilizes partition walls and  portable furniture to create a big and flexible space; in the miniature museum part, the design shows the exhibits according to local customs and traditional technical processes, which together forms a “real” farming scene.

The design of the facade is differentiated: the interior walls keeps the original flavour and historical information; the exterior walls are reconstructed, using local bamboo as a visual element forsun-shading, to adopt a more transparent and public appearance .

For the restaurant, the exterior walls of the south and north sides are kept, while the two sections one the west side and all the interior walls are dismantled. Borrowing from local visual elements, new transparent gable walls and furniture are designed to give a modern sense to the regional architecture style.

For the esst side of the site, according to the environment, a new turning corridor is built to connect the museum on the south side and the building on the north side. This becomes the new boundary of east side of the inner courtyard.

The two sections on the west side of the damaged auxiliary building on the north-west corner of the site are dismantled to form a new platform for exterior activities, which also creates a better view linking the two sides of the river.

The unused area on the north part of the site is cleaned out to create a new exterior platform, creating a more intimate linkage between the site, the ancient buildings on the north side of village, and the riverbank landscape.

The original grain-sunning ground in the middle of the granary is kept; the design reconditions the ground so that it could be used not only for grain-sunning, but also for outdoor gathering.

A new water landscape is design in the original fire pool in the courtyard; together with the persimmon tree on its side, the landscape become both the tallest point in the courtyard and a playground for children.

The pavement and green areas are all reorganized and redesigned using local stone materials and scrap materials from the dismantled building parts (such as bricks and tiles).

Mini-watt LED floodlights and LED strip lights are used for building exterior and landscape to create a tranquil atmosphere; this would give the renovated building a night visage that blends into the environment.

Lamps in the form of hanging baskets are specially customized for this project; these lamps would not only suffice the usage to light up both downward and upward, but are also in shapes that are in accordance with the spatial form.

The project was the winner of the “Social Equality Award” at the 2014 WA Awards for Chinese Architecture. Image and text source: http://www.archdaily.com/777339/xihe-cereals-and-oils-museum-and-villagers-activity-center-he-wei

9 thoughts on “Inherit the Culture and Re Imagine the Cities”