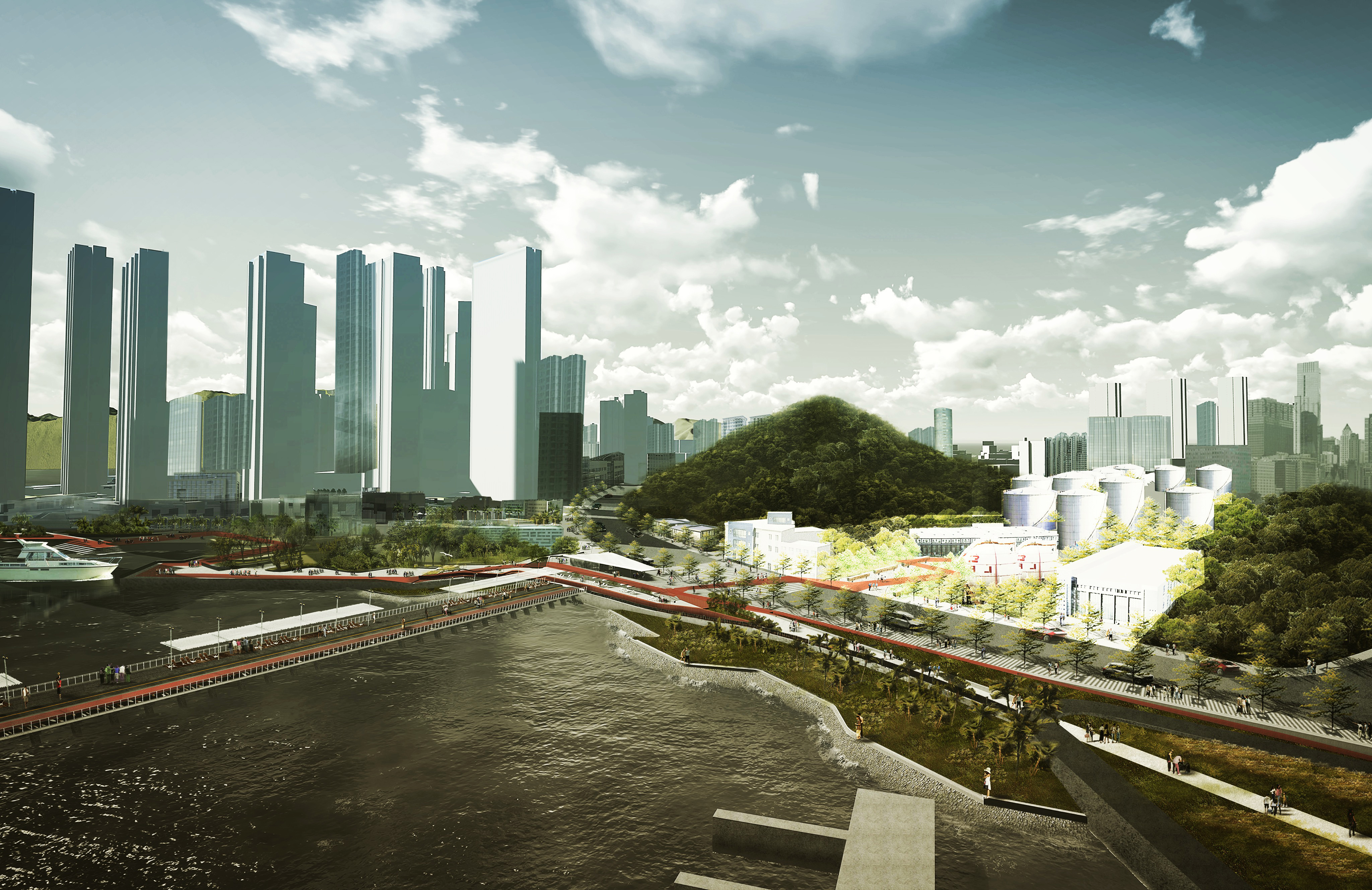 Shenzhen, one of China’s fastest urbanizing megacities, would be unlivable without its parks, squares, waterfront promenades, and green mountains. As the first Special Economic Zone China Established in 1980, the city placed itself on the frontier of domestic reform and urban architecture renewal, earning the reputation of China’s Design Capital. City building progressed so rapidly that the population has grown from 30,000 (1979), to 8.4 million 30 years later, from a fishing village to a fully industrialized metropolitan area. However, the Shenzhen speed of urbanization made the city a victim of its own success – the lack of cultural and livable urban public space has been a pressing issue for this immigration city.
The story I’m about to tell is how the remaking of Shekou Gasoline Depot brings an old-time green space back to its people, infusing life, joy and dynamics into the last piece of urban vacant land. 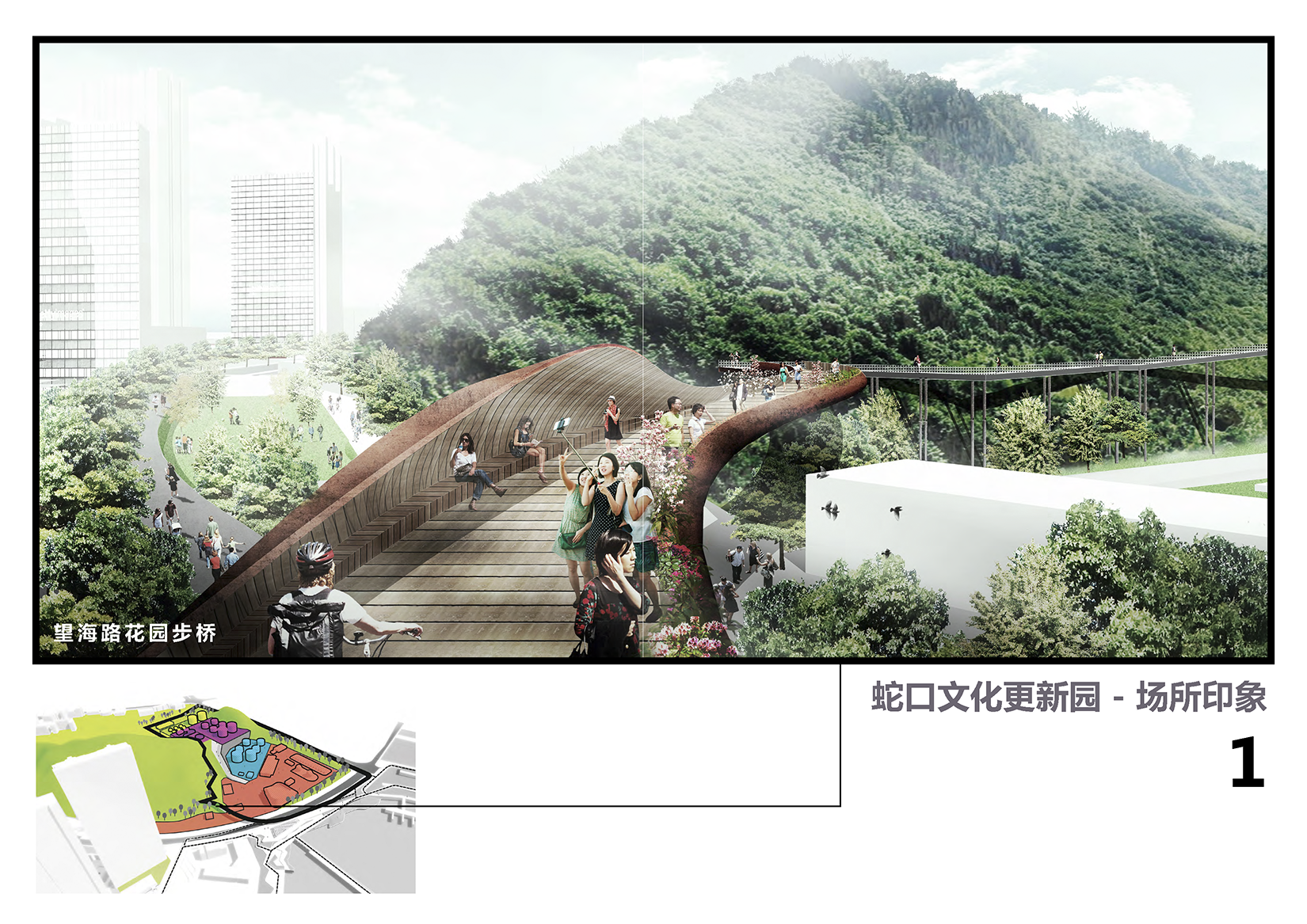 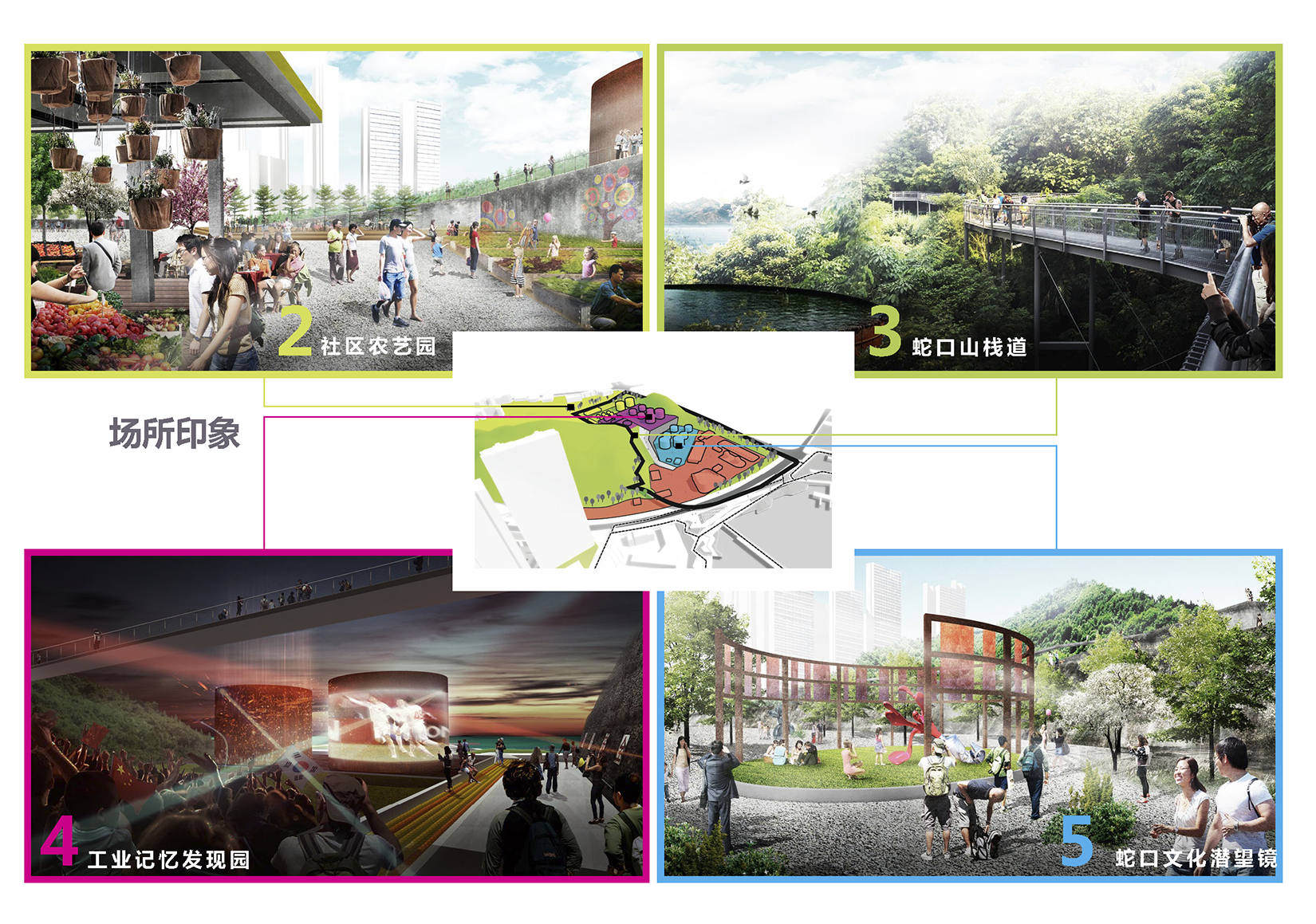 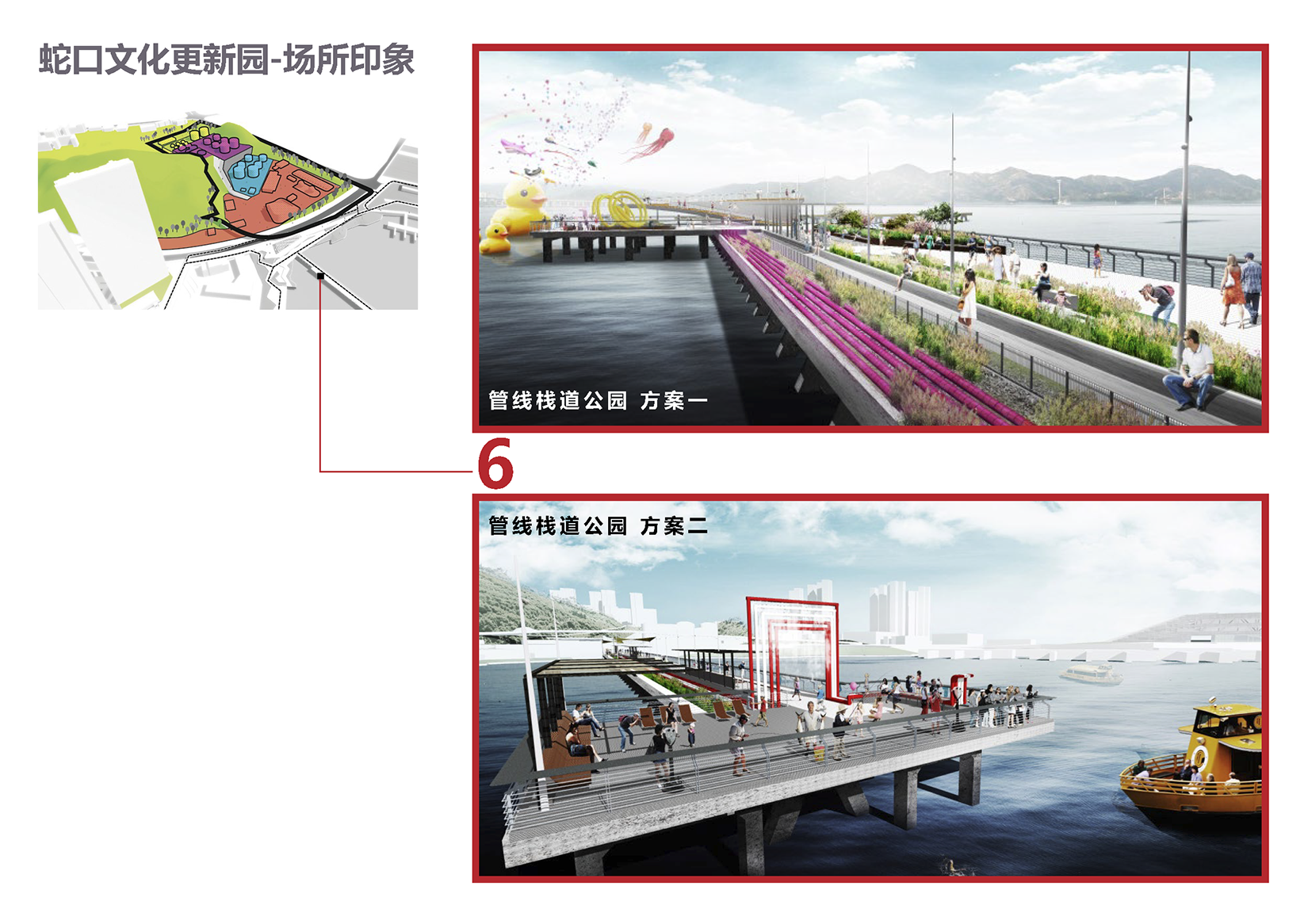 Opened in 1984, Shekou Gasoline Depot Site occupies 8 ha coastal land adjacent to the Dongjiaotou Green Mountain. It has been a gasoline storage facility operated by Sinopec and two other companies for 31 years, until the city officially terminate those tank farms and relocated its storage capacity to a remote area for the safety of surrounding booming residential neighborhoods of over 500,000 population. 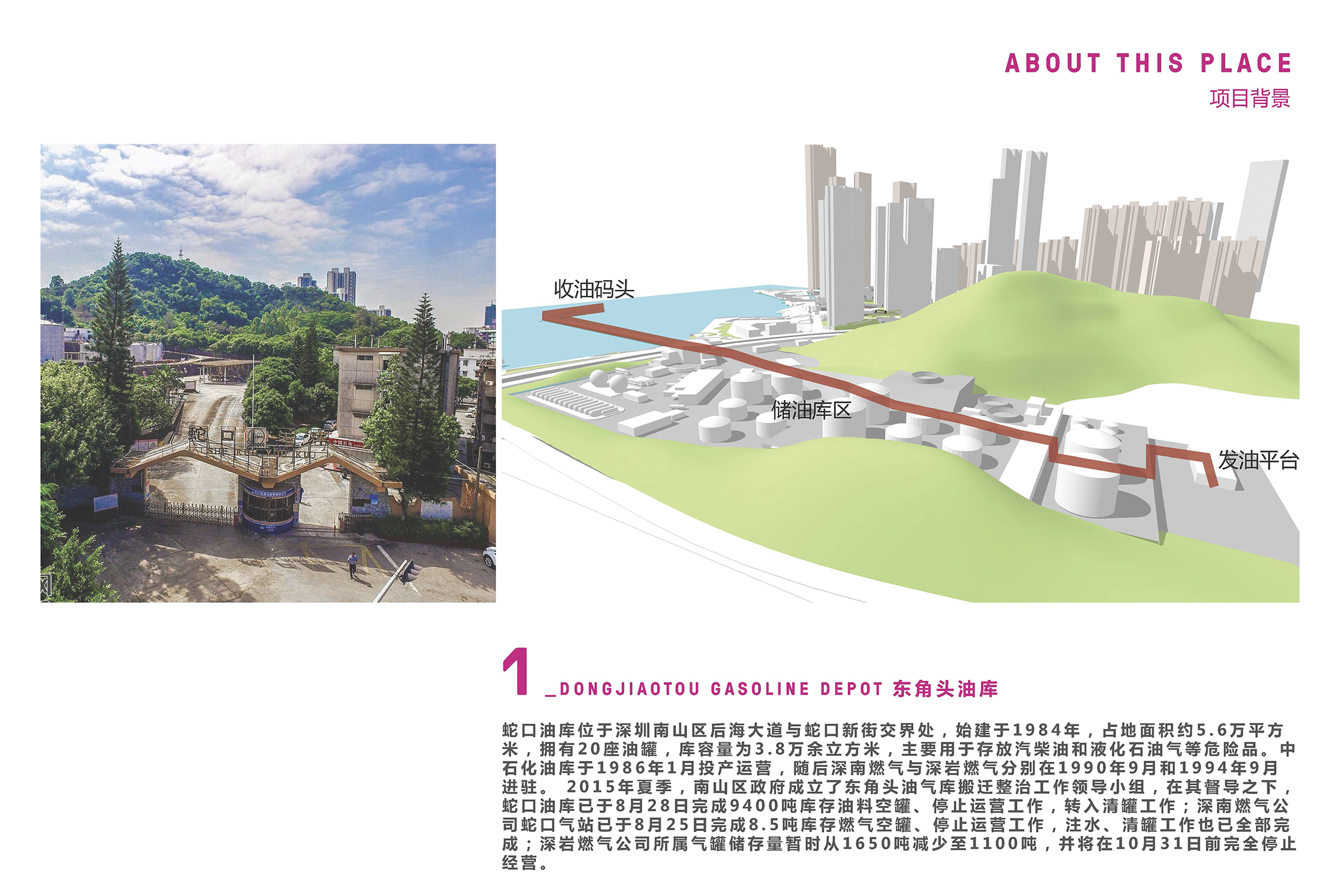 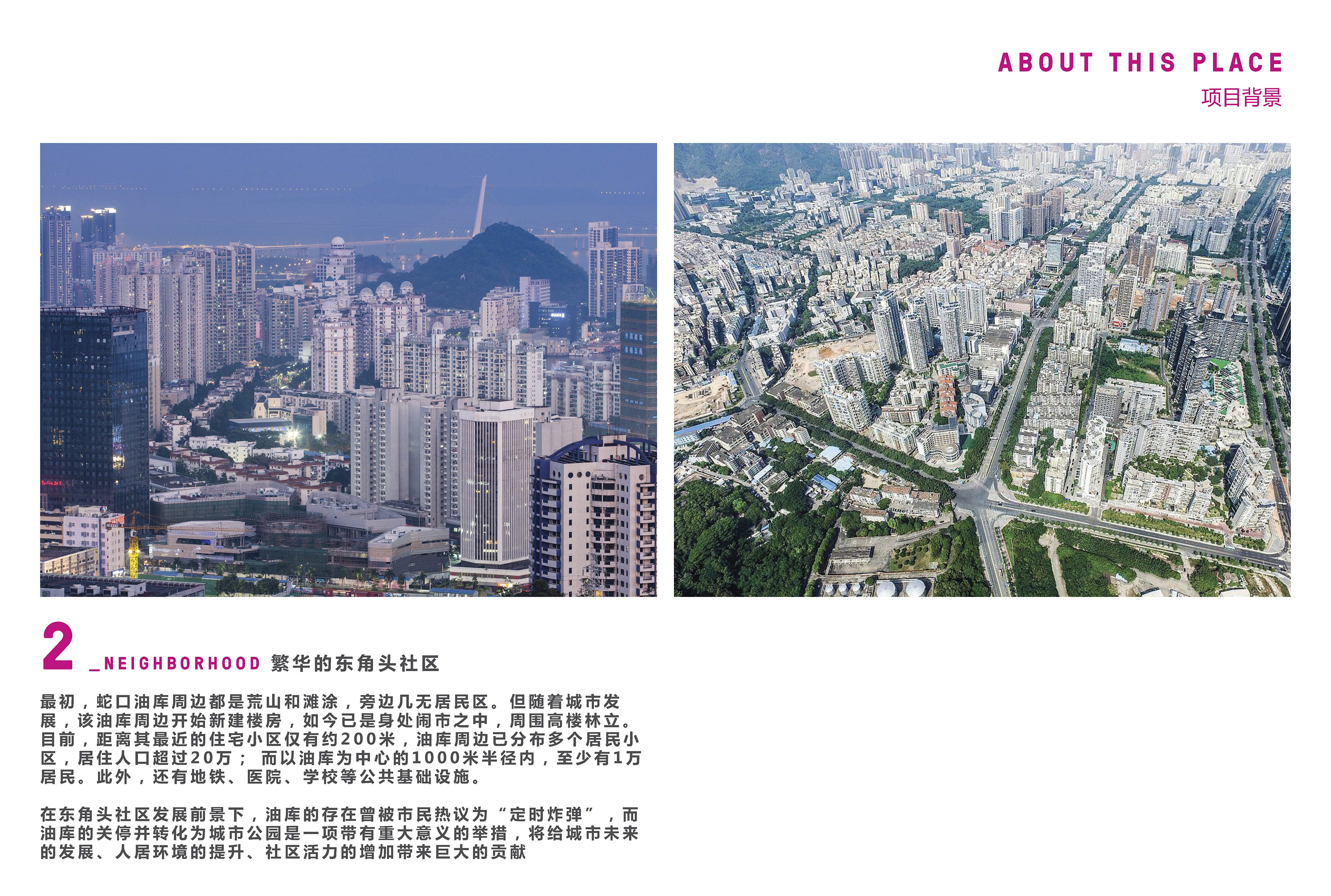 After served Nanshan District’s economy growth for decades, this piece of land is retiring from industrial purpose, and will immediately begin its new journey as a public park. Appointed by Nanshan Urban Management Bureau, the research and conceptualization of park’s adaptive reuse started from data mining of brownfield development and remediation methodology worldwide. 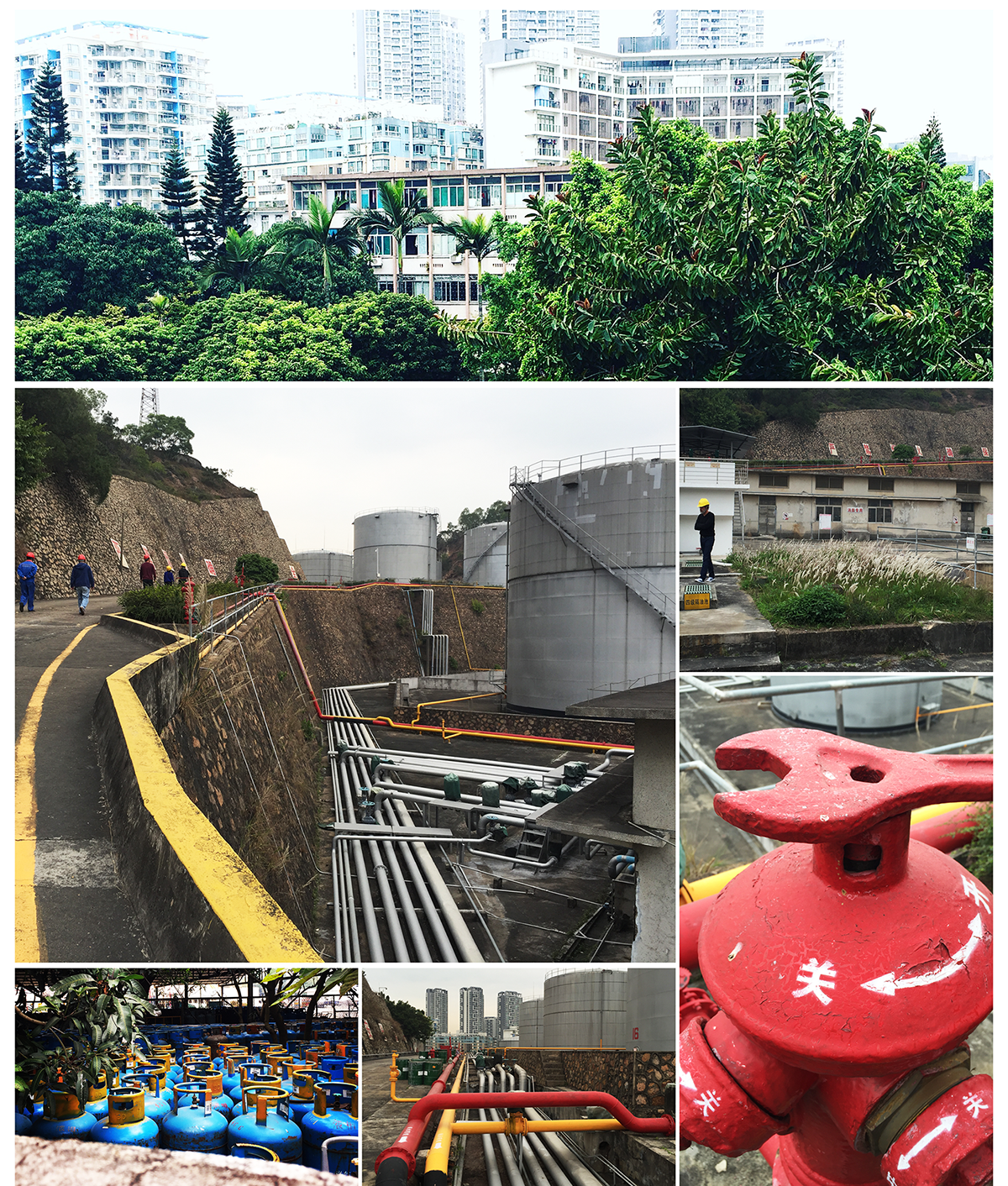 As a problem solver (and first a problem seeker), the design thinking began with defining its social agenda – what can the park do for the city’s future?  In Shekou urban reality, adaptive reuse of industrial buildings has been supported by the government authority and formed a trendy scene of converted loft offices and exhibition places in recent years. This 23 ha tank and hillside site is clearly unique in two ways:  the last available area in the dense urban fabric where new parks can be created; and unlike other post industrial sites that are isolated at the port area or urban neighborhood, the site was integrated into dramatic hillside with fresh ocean air and views to the Shenzhen Bay. 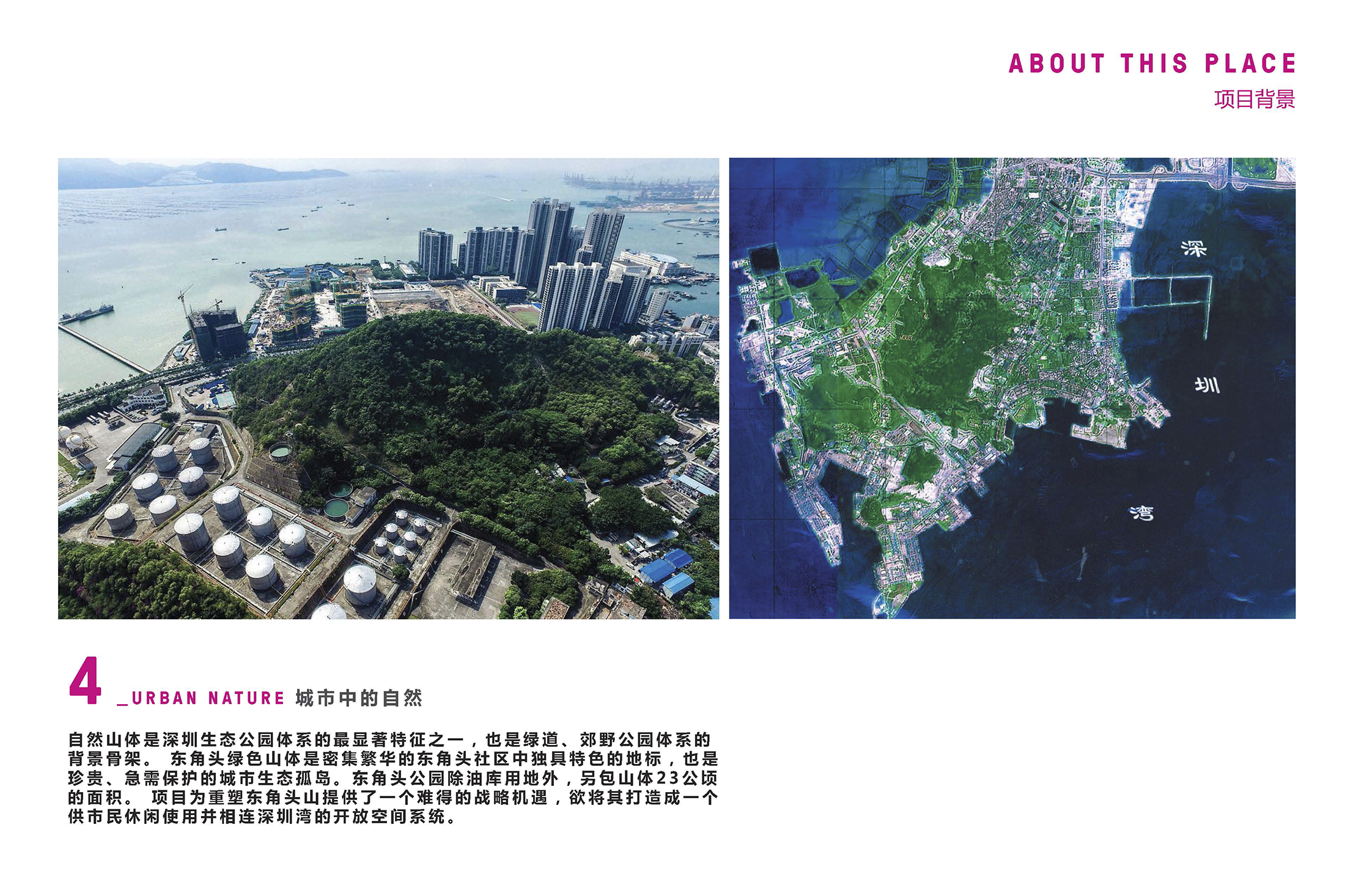 Adjacent to Shenzhen Bay Shekou Promenade which is a crucial public waterfront leisure belt to be completed construction in October 2017, the Oil Tank Park Site also affords a strategic opportunity to remake the Dongjiaotou Mountain for public leisure uses, building an interlocked open space system with Shenzhen Bay Waterfront. It marked a rare location along Shenzhen bay shoreline where the foot of a mountain and water edge actually get so close, which reminds people the mountain-seashore relationship in the region 30 years ago, before the large scale land filling and formation of industrialized shoreline. (See diagram below for this contextual information) 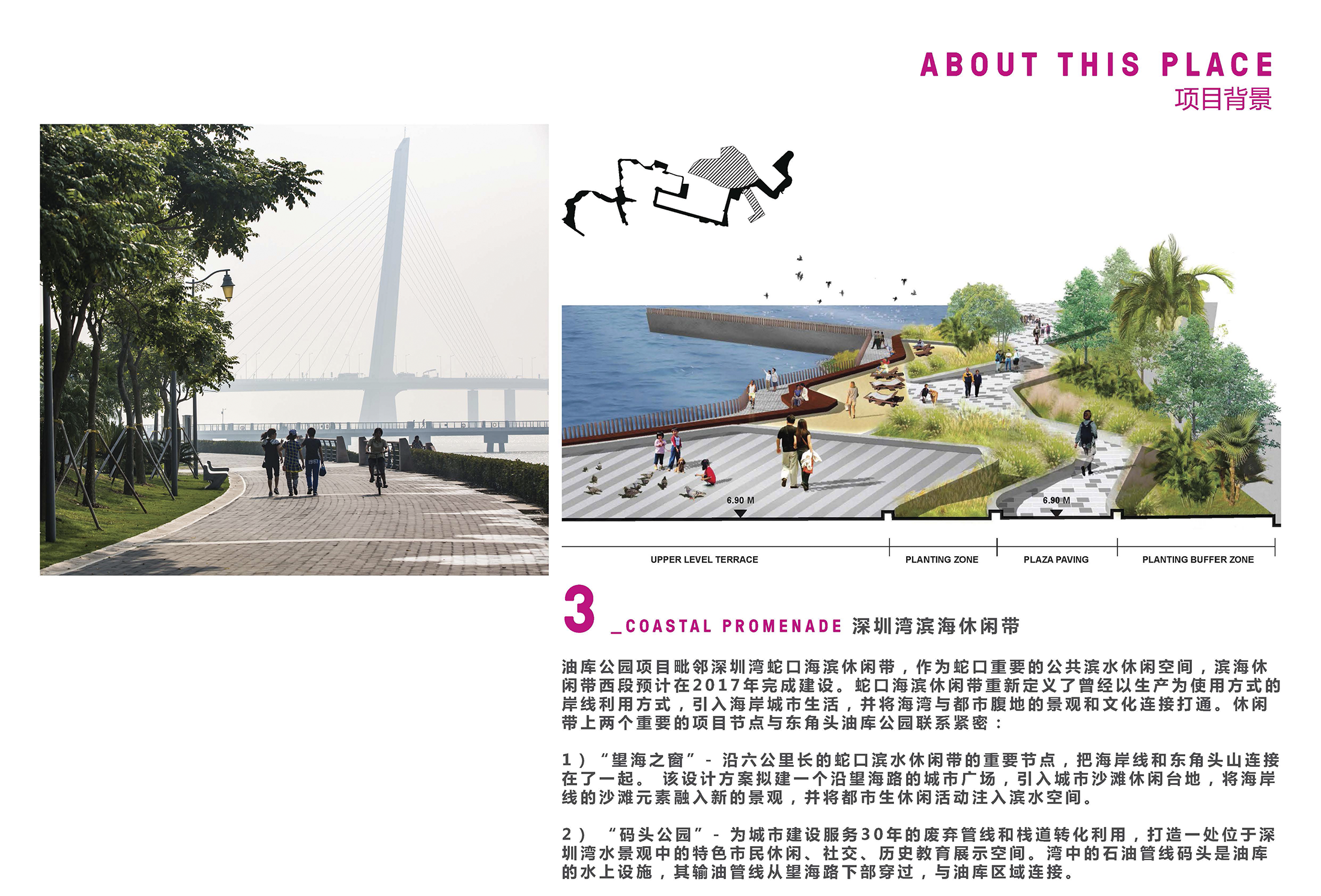 The illustration above shows Shekou Promenade design at Dongjiaotou Mountain foot location – Window to the Sea. Along the 6 KM long  UrbanWaterfront Leisure Belt, it is a key spatial node stitching the shoreline and Dongjiaotou Mountain together, also where the oil pipes run cross Wanghai Road to the oil loading pier in the Bay. The design scheme featured an extended urban plaza and terraces with Re – Imaged urban sandy beach, aiming at bringing back the historical shoreline experience, and infuse this underutilized space with leisure activities and urban dynamics. 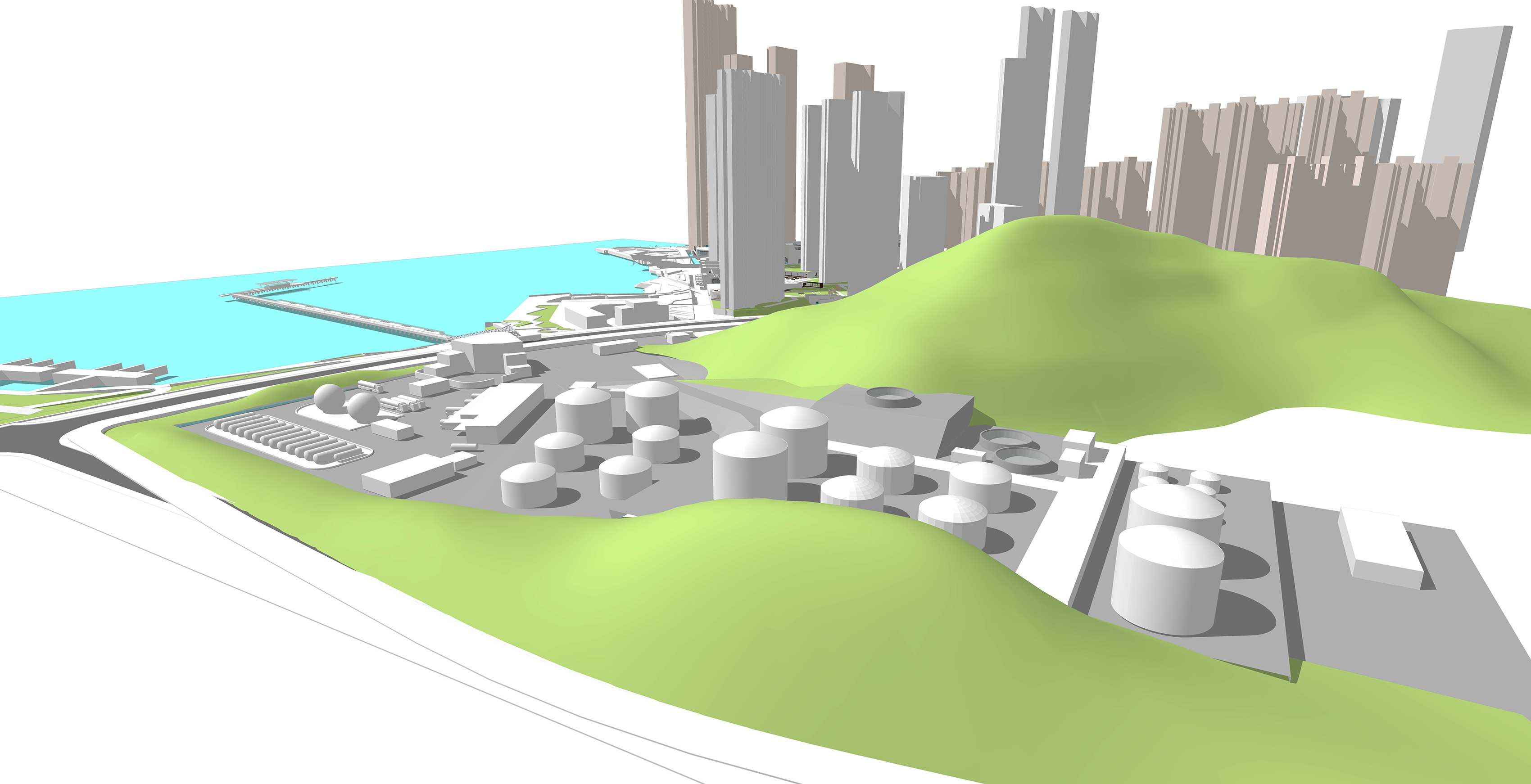 Before the operation terminated in 2015, Shekou Gasoline depot has been called a “time bomb” by the citizens of Dongjiaotou Community in describing the negativity of this “dangerous” facility.Tightly surrounded by residential developments, the tanks are only 200 meters away from the nearest residential unit. In recent years, luxury high-rise real estates have put Shekou Dongjiaotou on the map as one of Shenzhen’s most sought-after neighborhoods for life quality.  It’s really the time for a transformation.

Reflecting upon the old, historically industrial past to generate the new, sustainably-enriched experiences of Shekou’s  future, the design started from understanding how the park can be created as a series of transformed spaces which call upon renewed experiences and a re-imagined memory of the city.
OPPORTUNITIES: Interplay of Shekou’s most defining heritage – industrial past, green mountain and coastal connection
Envisioned to be a unique and innovative experience urban parks in Shenzhen have yet to offer, Shekou Mountain Park celebrates the spatial tension between the site’s industrial relics and its intertwined position within the Dongjiaotou Mountain and its location along the bay. Going hand in hand with the goal of sustainability and postindustrial reclamation, the park looks to provide a refreshing and memorable urban itinerary for Shenzhen’s vibrant and forward-looking lifestyle. 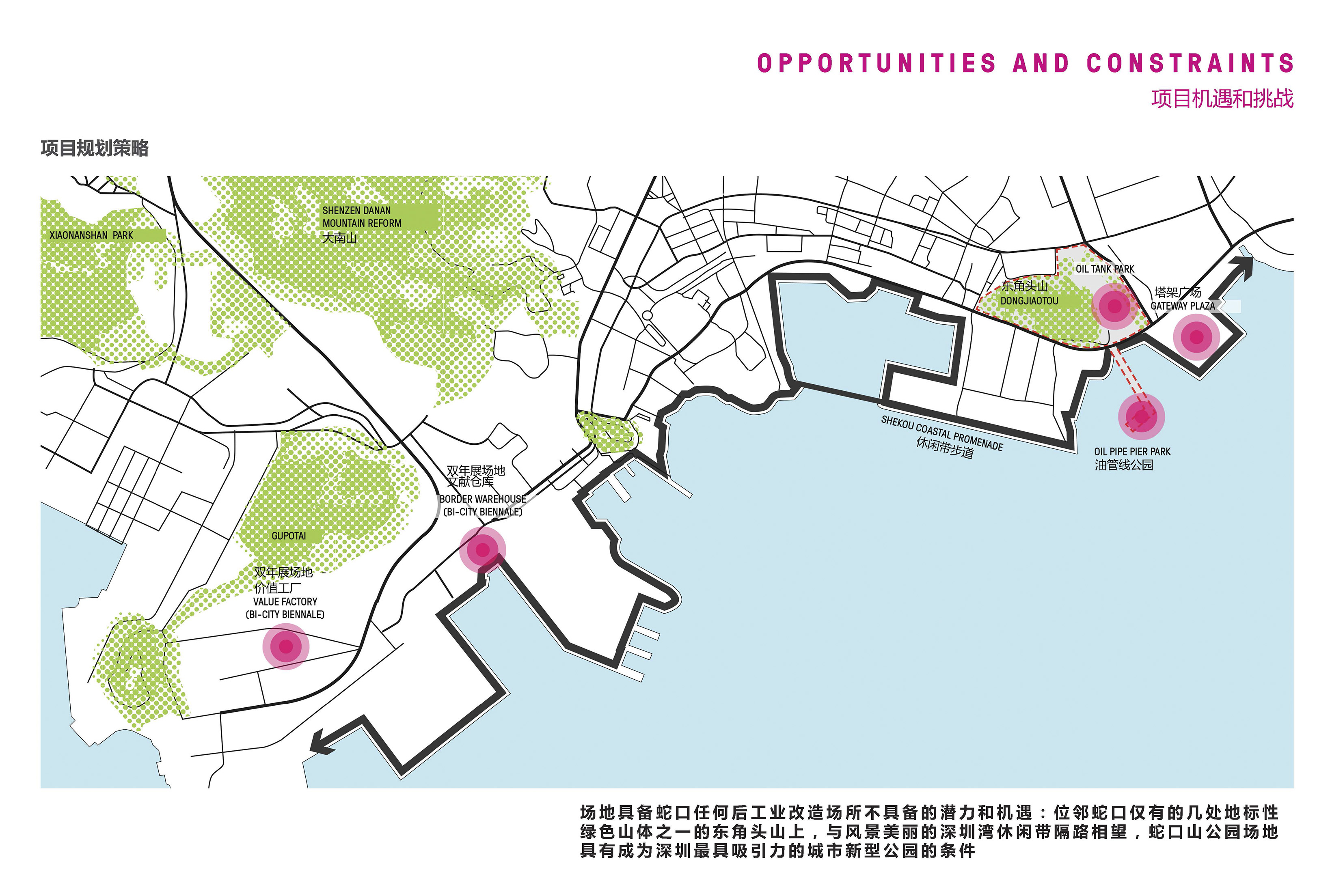 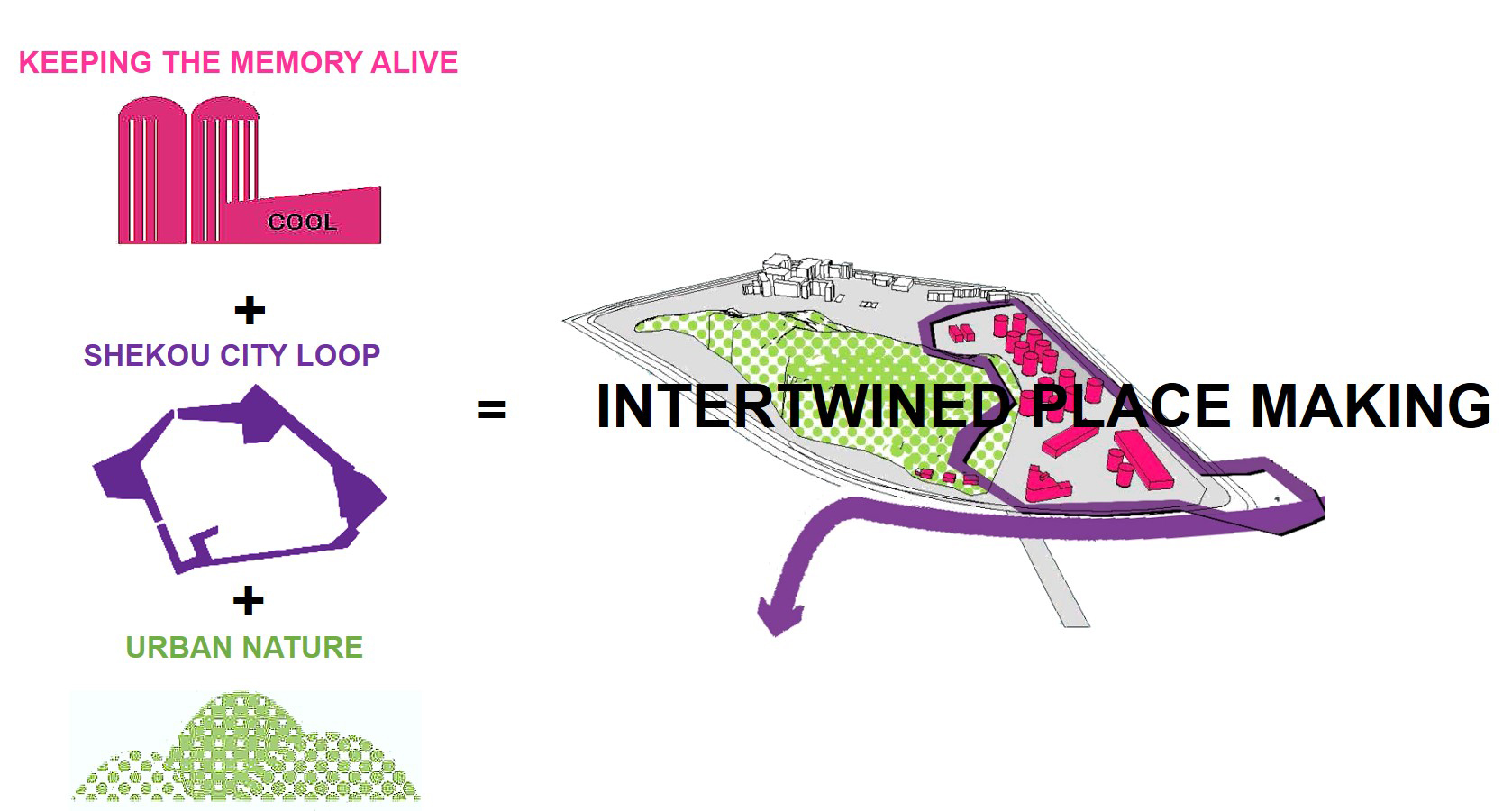 Keeping the Memory Alive – creating artful markers with industrial heritage (remaining walls, tank structure or base) that allow people to appreciate, interact with and reflect upon the site’s history, blending subtle beauty of industrial remnants and bold graphic and color expression
Shekou City Loop – proposing a 1.5 KM long connective walk/bridge loop system that ties the industrial park space, mountain trails and waterfront promenade together with a fluid and distinct identity
Urban Nature  – Preserving and enhancing the urban nature and habitat which will foster a “win-win” scenario in which both people and biodiversity benefit. The realities of infrastructure both natural and manmade are at the heart of Shekou’s history, and mountains are important features along the coast
Intertwined Place Quality and Materiality – enhance the interplay between Old and New (storage facilities relics and park landscape), and interplay between Soft and Structural (green mountain and concrete operation space) by weaving the opposites to create spatial composition
PARC RENEW proposal aims to bring people, nature and culture to a transformed gasoline depot, integrating the industrial heritage and natural heritage into the new, sustainably-enriched park experiences for Shekou’s future. A variety of programs are introduced to reinhabit an old facility into an vibrant urban public space 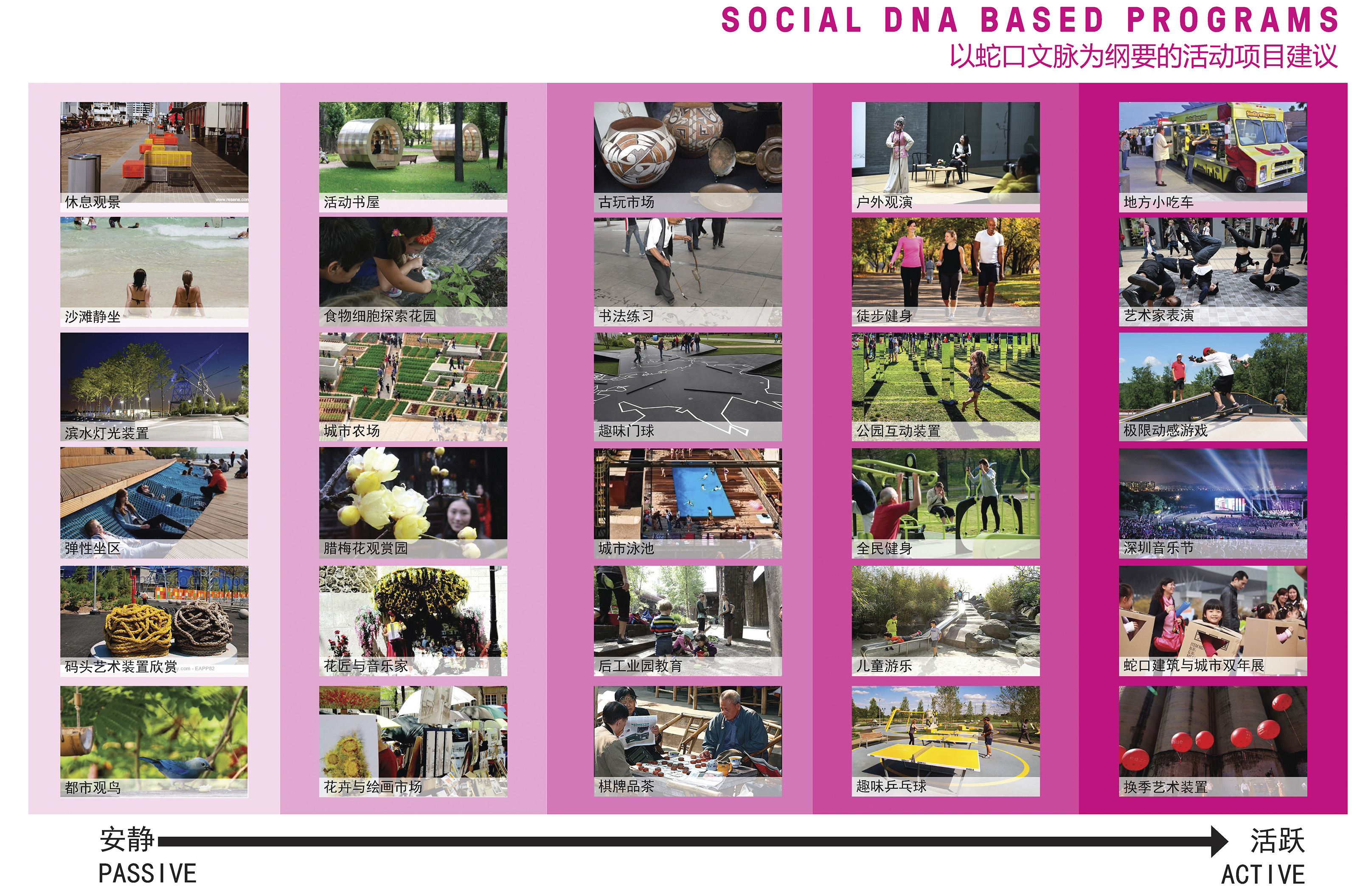 CONSTRAINTS: how to reconnect the isolated Gasoline depot site with city fabric, making an inviting public park for people
Enclosed by screening vegetation all the way around, the facility has very limited physical and visual connection with outside. More importantly, it prohibited the communities from accessing the mountain as their green space for 3 decades. 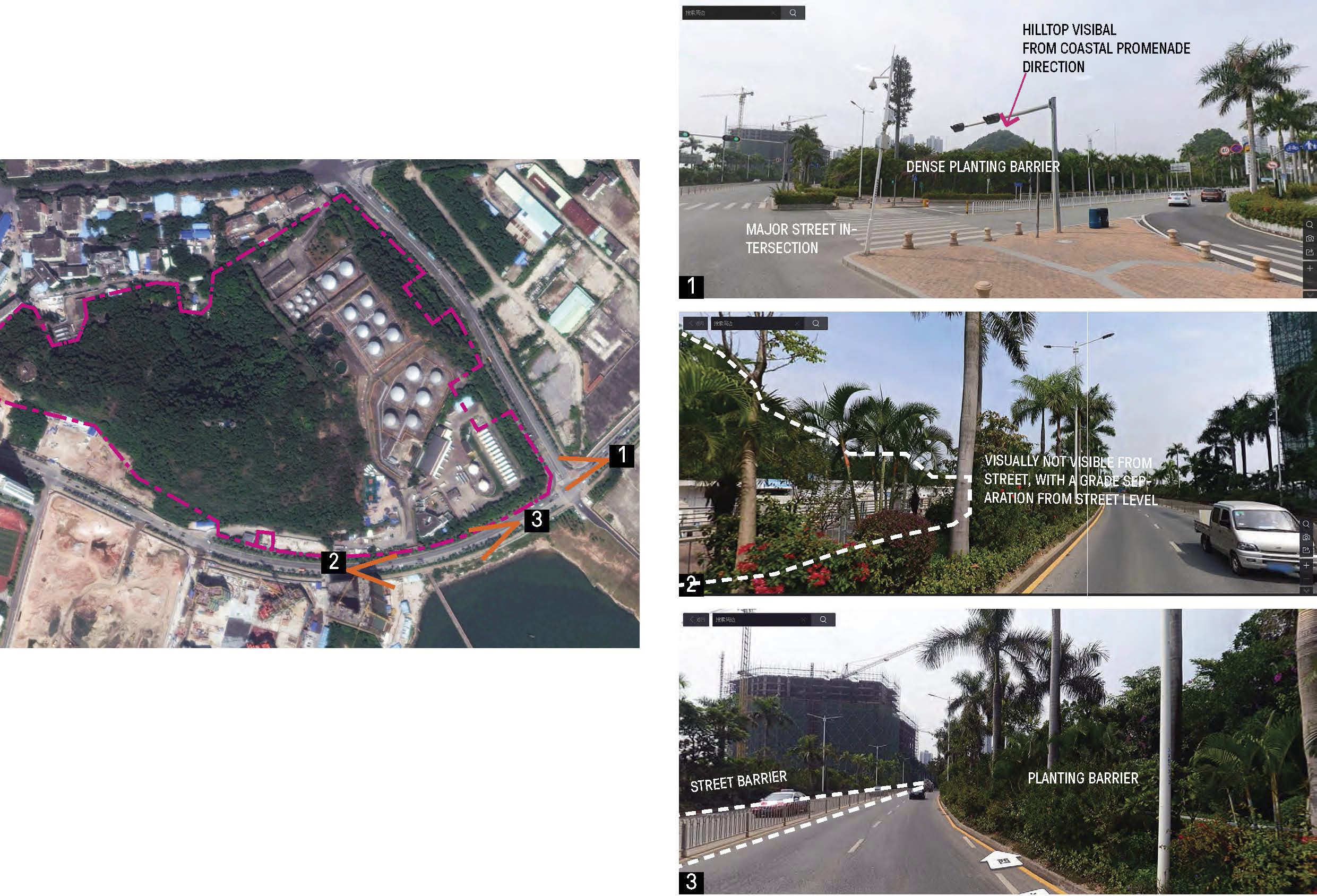 When asked by a journalist about his memory of Dongjiaotou Mountain, a senior citizen emotionally commented on how much they missed the Spring time school tree planting program at Shekou Mountain, before the depot was built. And how much its reinhabitation into a new park excites the city, for it opens up this territory for people again. 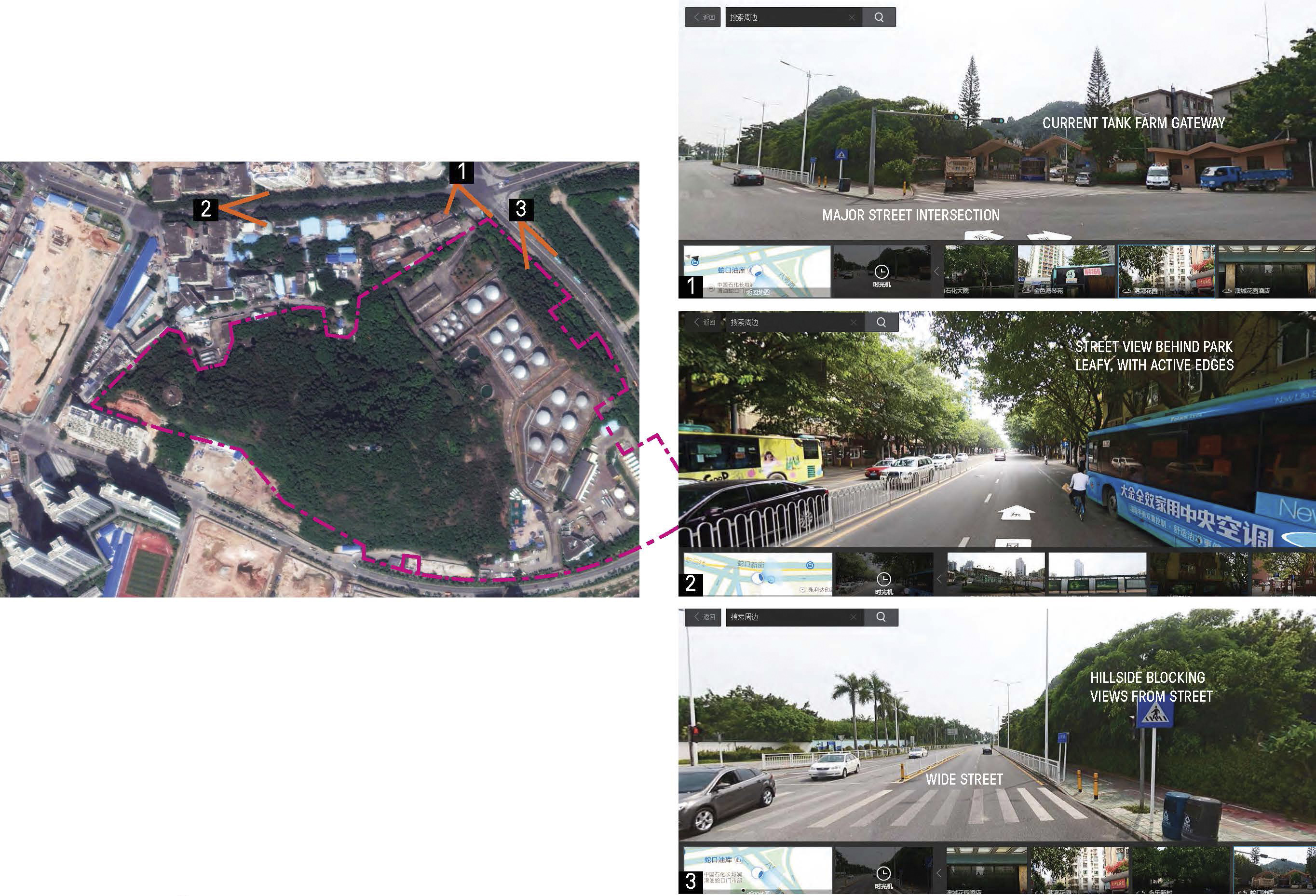 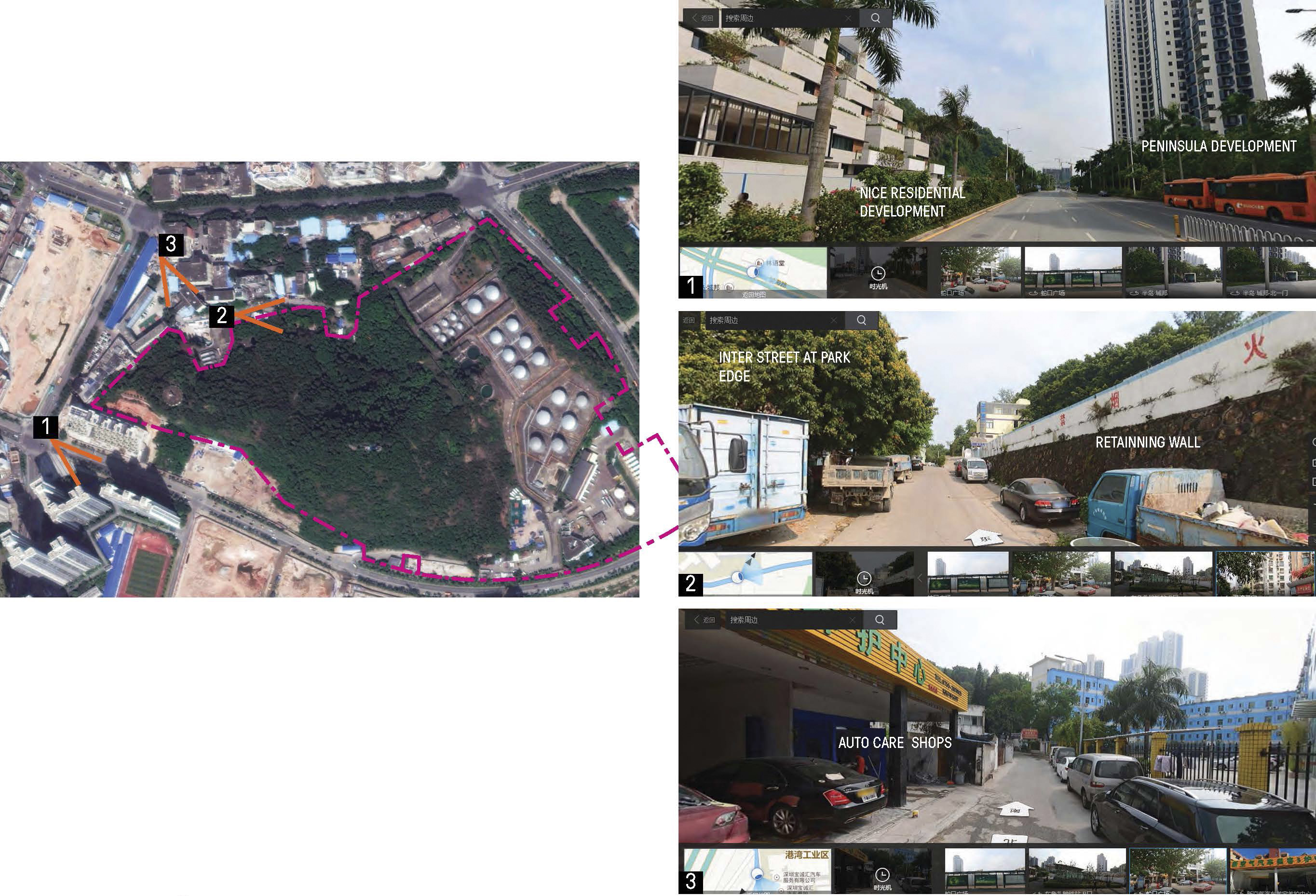 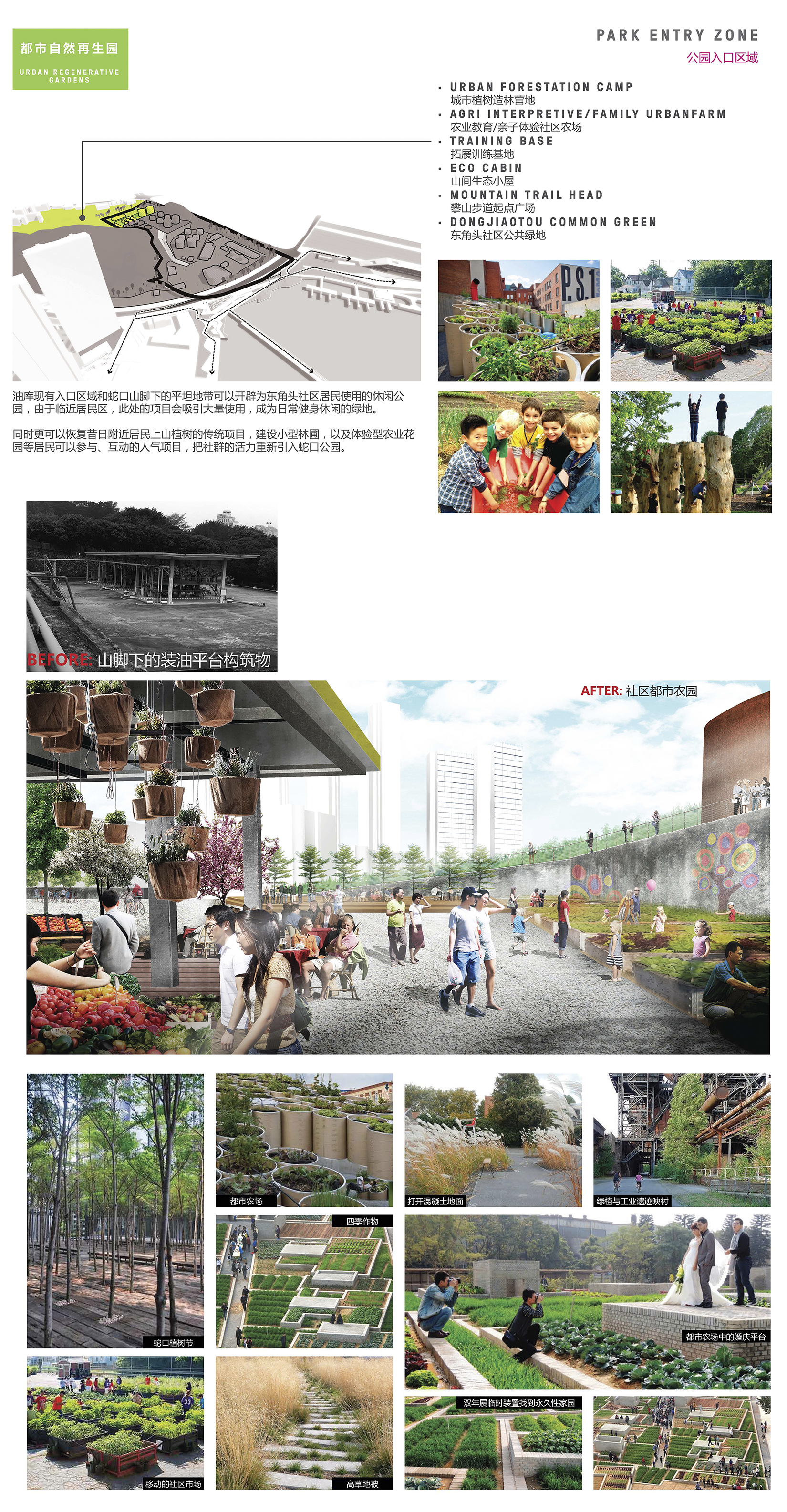 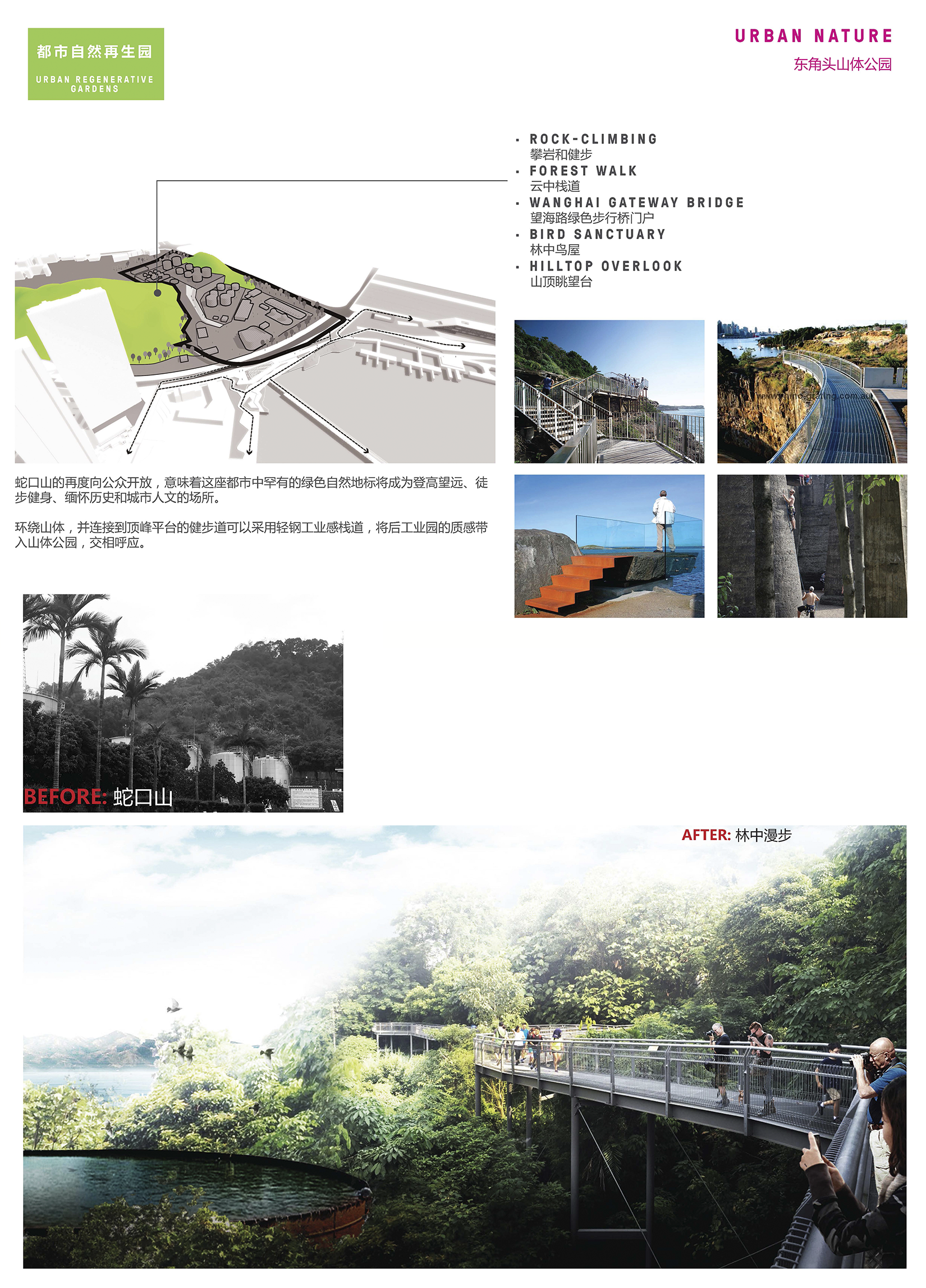 The storage tank area in the middle portion of the site defined by two terraces is envisioned to be core post industrial park experience with mysterious and sculptural quality – Industrial Memory Zone and Culture Periscope Zone.  The Culture Periscope garden preserves the magic of tank structure’s concrete base pad, converting the empty circular spaces after tanks removal into landscaped rooms and interpretive spaces for discovery of shekou’s memorable culture heritage. While the Industrial Memory garden on top tier of terraces preserves most of the tank structures, introducing a small outdoor evening movie plaza with a breathtaking bay view. The preserved tank structure will be converted with lighting, graphics intervention, even re fabricated into a small gallery space, or James Turrell Skyspace inspired Art installation. 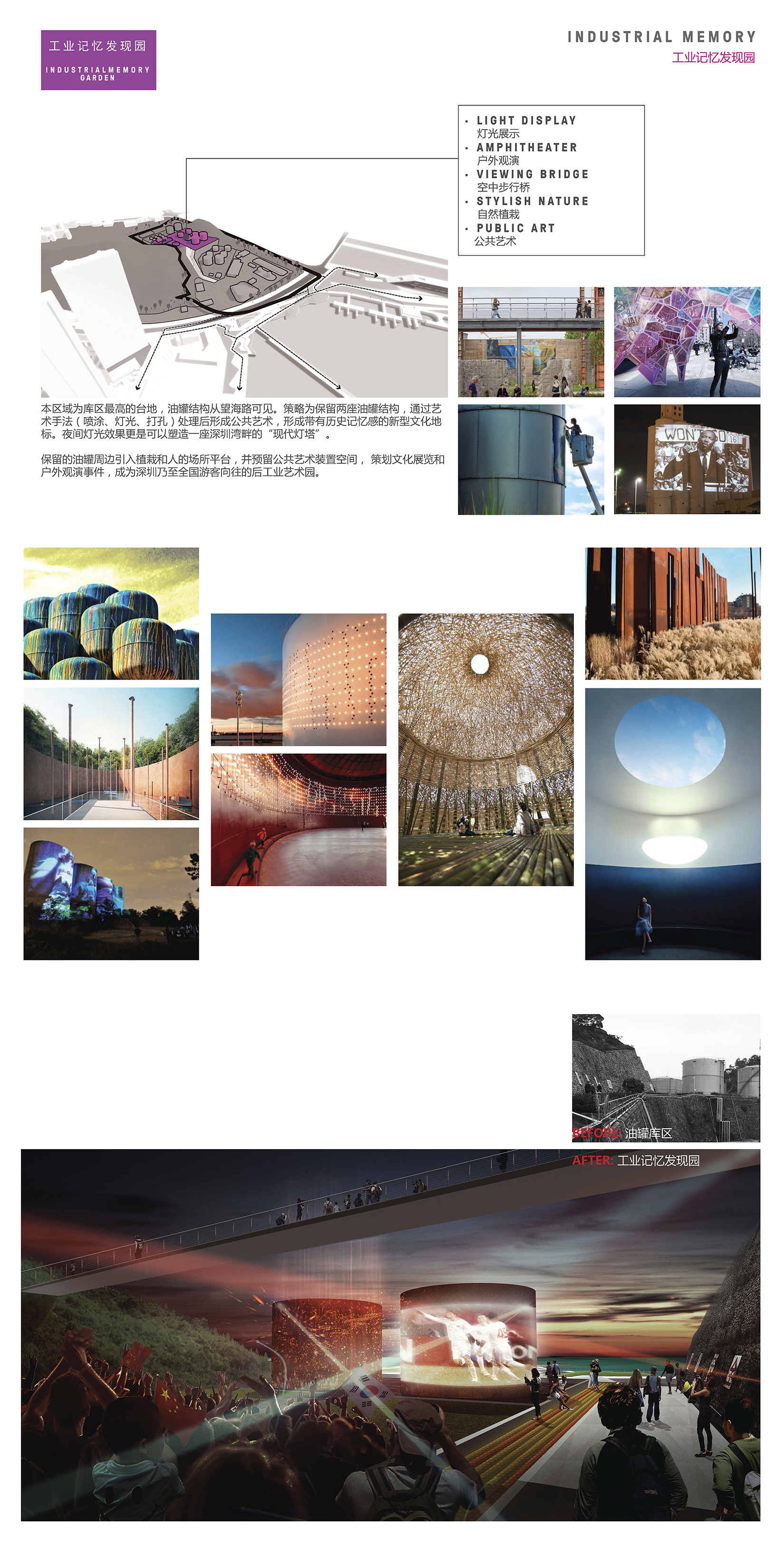 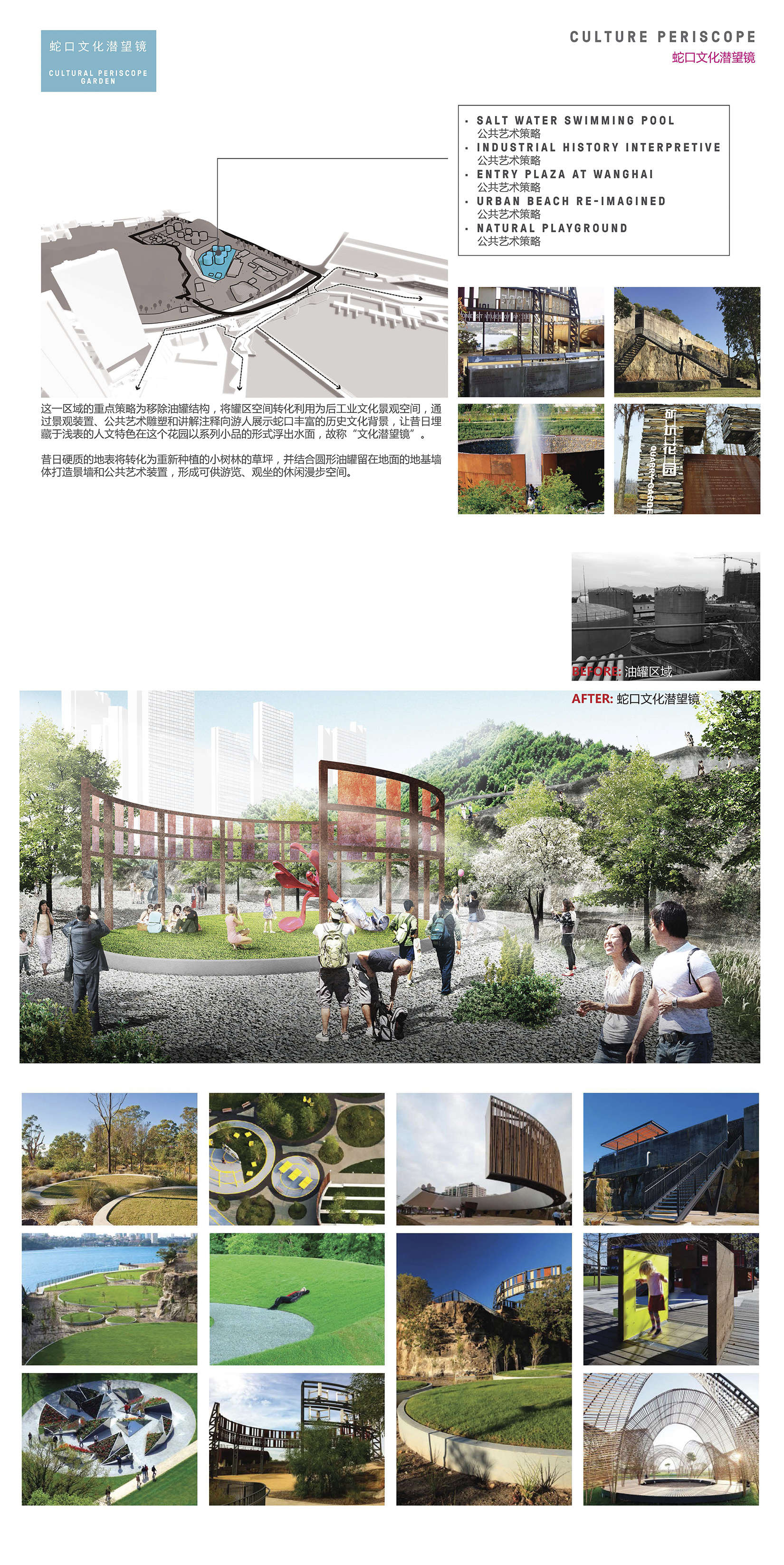 Hedonism Urban Retreat Zone is the closest area to the busy Wanghai Road and Shekou Coastal Promenade, with most public feel. It is imaged to be the most active recreational destination with oceanfront-themed programs – public pool with man made beach, natural playgrounds and tea pavilions, all in a refreshing, and retrofitted post industrial setting. 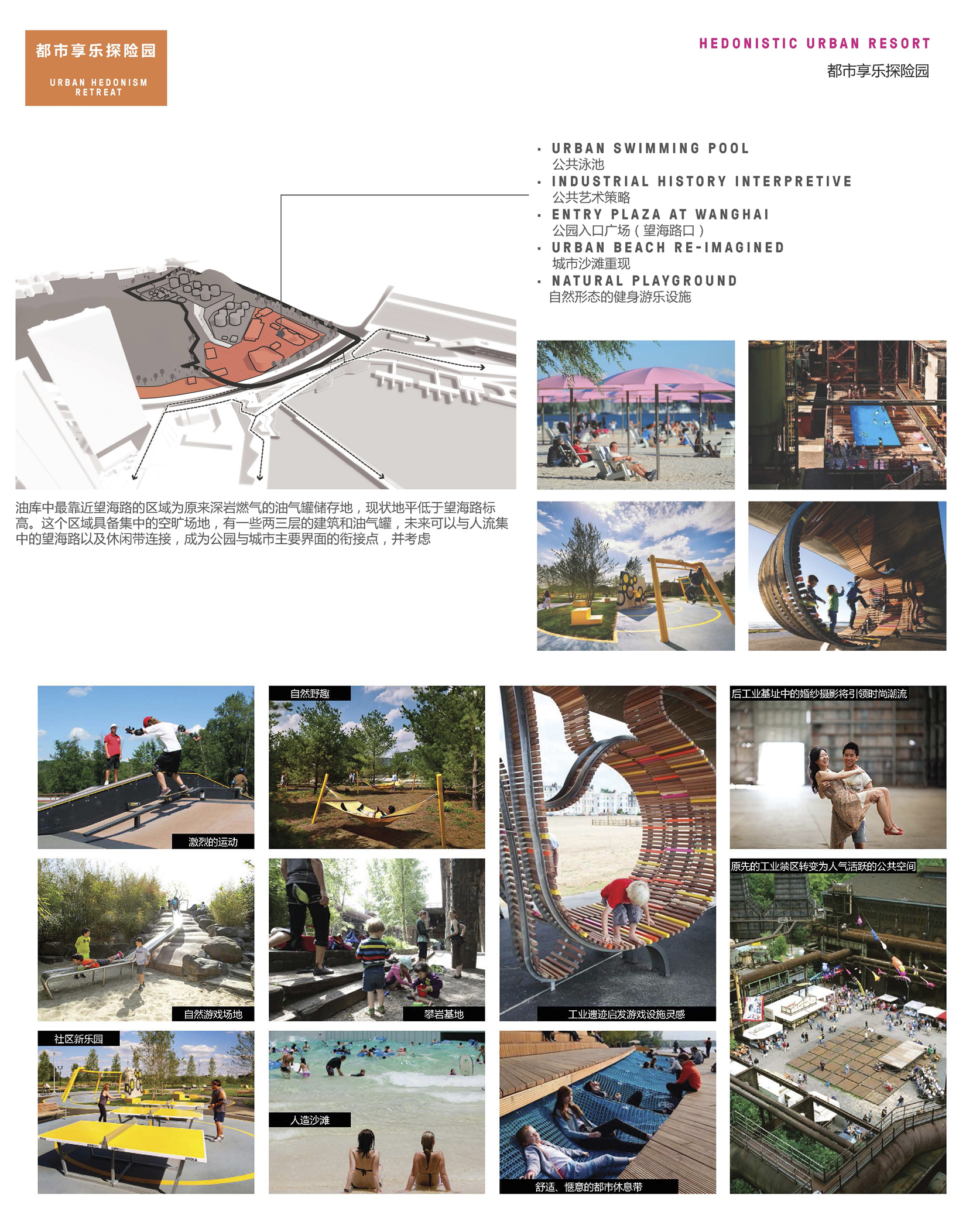 Places of sun and shade, comfort and challenge, movement and inertia, retreat and the social, play and rest, learning and discovery, all make up the experience of Shekou’s public space – a transformed urban landscape which reuses the remnants of the city’s mountainous terrain and the remaining relics of its industrial heritage.
Lastly, a 1.5 KM long pedestrian loop (walk and bridge)  ties the themed park zones together with a fluid and distinct identity. Images below elaborate the 4 types of materiality for which the loop is made of, defined by the character park zones the loop is passing through, including the forest walk on the hillside, the green flyover crossing the Wanghai road, urban promenade with graphic and color enriched surface paint, and the secondary walks within the storage tank area and oil pipe pier in the Bay. 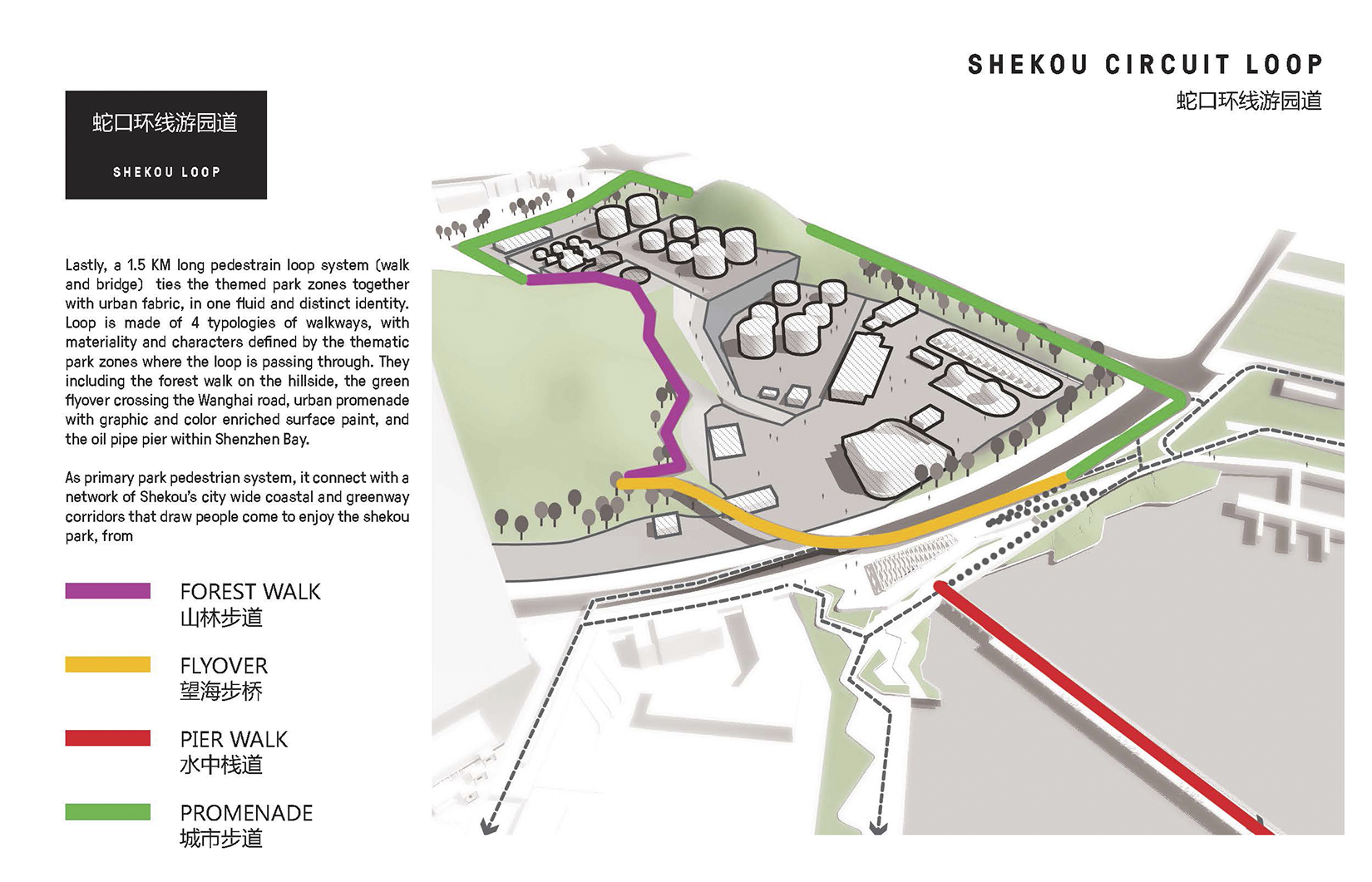 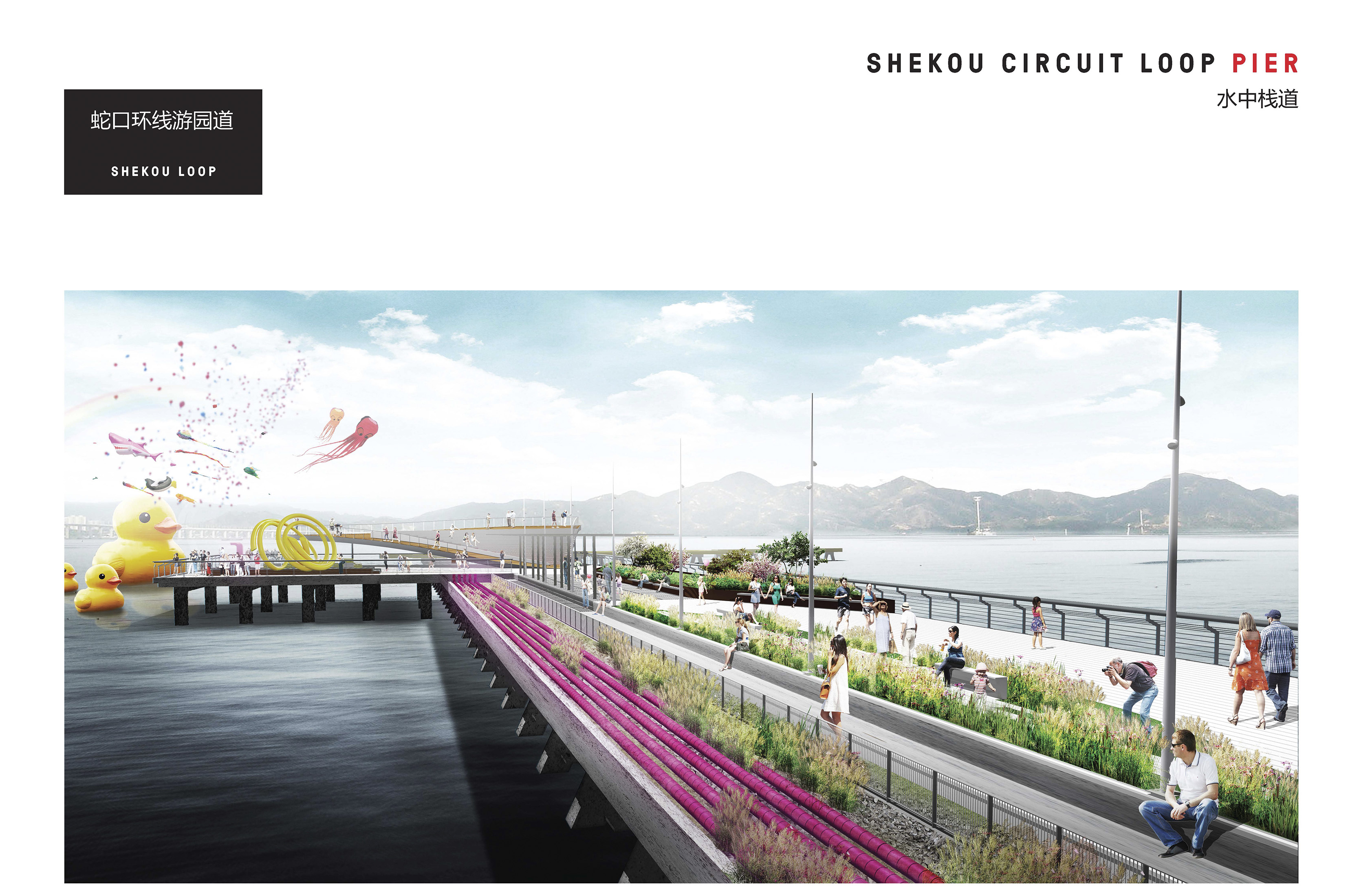 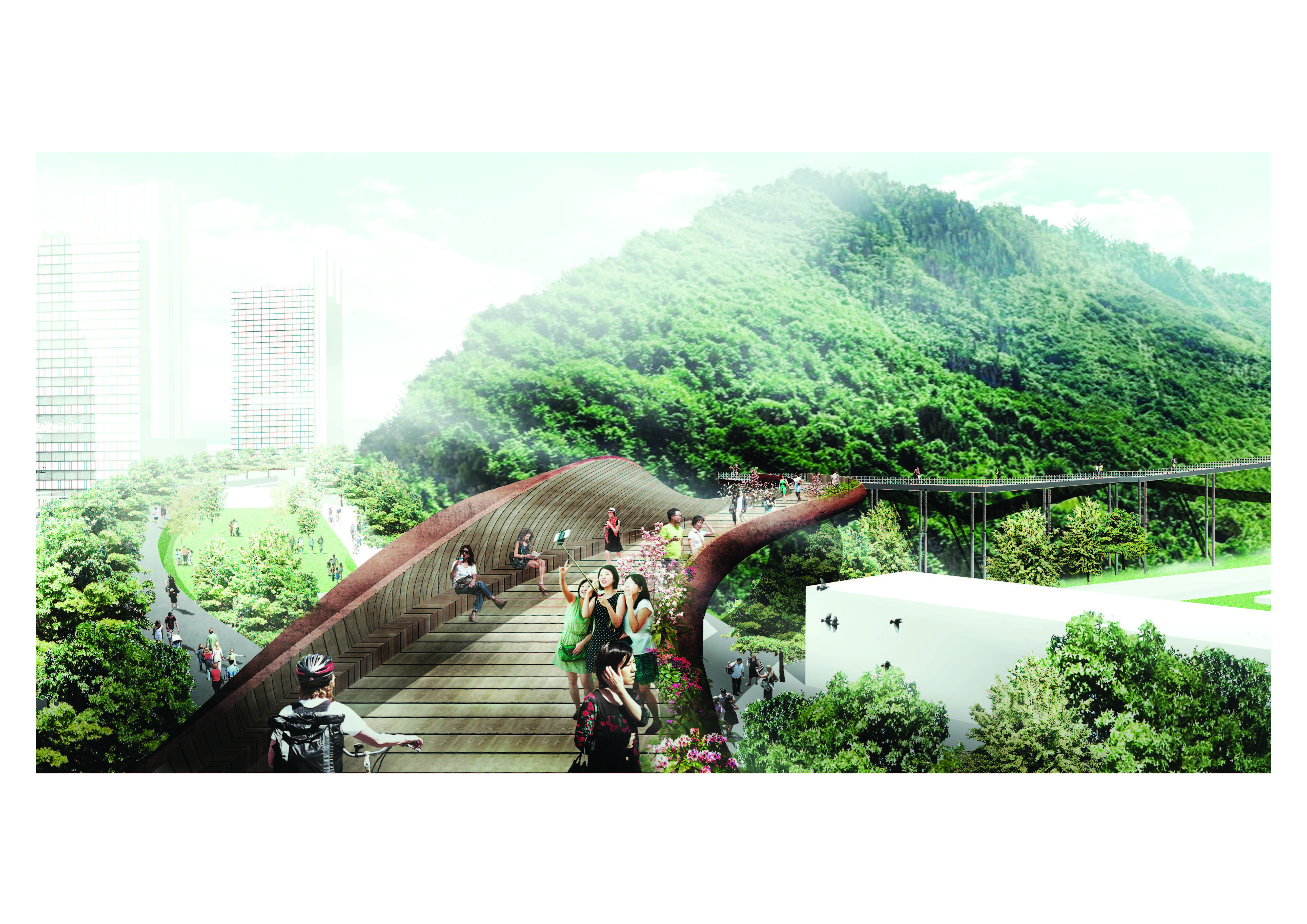